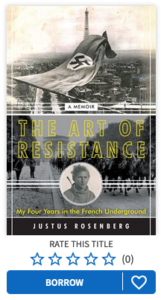 The Art of Resistance by Justus Rosenberg is a wonderful memoir.  The book, which reads like a novel, begins with the author’s childhood in Danzig (present-day Gdansk, Poland), and spans the years of WWII, detailing an extraordinary life. As a young man, studying at the Sorbonne in Paris, war breaks out, changing Justus’ life in ways he could not have imagined. Joining the French Underground, Justus is forced to adapt to life in ever changing ways, in order to survive. Determined to make it through the war, and relying on his knowledge and wits, Justis courageously endures life as a resistance fighter, narrowly escaping death several times. Written shortly before the author’s 100th birthday, The Art of Resistance is informative from a historical perspective, while giving us a look into the life of a young man, coming of age in a horrific time.  I highly recommend reading this memoir, written by a man who champions the notion that all human beings are equal and deserve to be treated as such.

This book is available as an ebook through Hoopla.

“In 1937, after witnessing a violent Nazi mob in his hometown of Danzig, a majority German city on the Baltic Sea, sixteen-year-old Justus Rosenberg was sent by his Jewish parents to Paris to finish his education in safety. Three years later, the Nazis came again, as France fell to the Germans. Alone and in danger, Justus fled Paris, heading south. A chance meeting led him to Varian Fry, an American journalist in Marseille who led a clandestine network helping thousands of men and women-including many legendary artists and intellectuals, among them Hannah Arendt, Marc Chagall, Andre Breton, and Max Ernst-escape the Nazis. With his intimate understanding of French and German culture, and fluency in several languages, including English, Justus became an invaluable member of Fry’s operation as a spy and scout.

After the Vichy government expelled Fry from France, Justus worked in Grenoble, recruiting young men and women for the Underground Army. For the next four years, he would be an essential component of the Resistance, relying on his wits and skills to survive several close calls with death. Once, he found himself in a Nazi internment camp, with his next stop Auschwitz-and yet Justus found an ingenious way to escape. He two years during the war gathering intelligence, surveying German installations and troop movements on the Mediterranean. Then, after the allied invasion at Normandy in 1944, Justus became a guerrilla fighter, participating in and leading commando raids to disrupt the German retreat across France.

At the end of the Second World War, Justus emigrated to America, and built a new life. For the past fifty years, he has taught literature at Bard College, shaping the inner lives of generations of students. Now he adds his own story to the library of great coming-of-age memoirs: The Art of Resistance is a powerful saga of bravery and defiance, a true-life spy thriller touched throughout by a professor’s wisdom.“