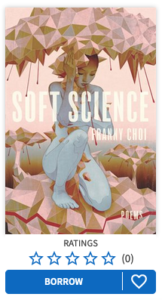 The Spring 2019 issue of The Paris Review served as my introduction to Franny Choi, in the form of “Amid Rising Tensions on the Korean Peninsula.” I was floored by that poem. Even after reading it untold times I remain astonished by that poem. Shortly after that first encounter I read “Introduction to Quantum Theory,” which can be found in Soft Science, and knew that I’d be walking through any door Franny Choi left open.

Soft Science is available as an ebook through Hoopla.

“Soft Science explores queer, Asian American femininity. A series of Turing Test-inspired poems grounds its exploration of questions not just of identity, but of consciousness-how to be tender and feeling and still survive a violent world filled with artificial intelligence and automation. We are dropped straight into the tangled intersections of technology, violence, erasure, agency, gender, and loneliness.”