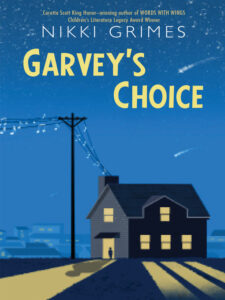 “Garvey’s father has always wanted Garvey to be athletic, but Garvey is interested in astronomy, science fiction, reading—anything but sports. Feeling like a failure, he comforts himself with food. Garvey is kind, funny, smart, a loyal friend, and he is also overweight, teased by bullies, and lonely. When his only friend encourages him to join the school chorus, Garvey’s life changes. The chorus finds a new soloist in Garvey, and through chorus, Garvey finds a way to accept himself, and a way to finally reach his distant father—by speaking the language of music instead of the language of sports.

This emotionally resonant novel in verse by award-winning author Nikki Grimes celebrates choosing to be true to yourself. ” 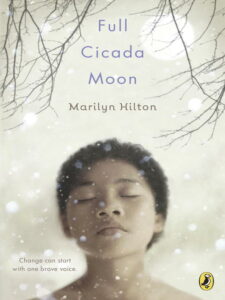 “It’s 1969, and the Apollo 11 mission is getting ready to go to the moon. But for half-black, half-Japanese Mimi, moving to a predominantly white Vermont town is enough to make her feel alien. Suddenly, Mimi’s appearance is all anyone notices. She struggles to fit in with her classmates, even as she fights for her right to stand out by entering science competitions and joining Shop Class instead of Home Ec. And even though teachers and neighbors balk at her mixed-race family and her refusals to conform, Mimi’s dreams of becoming an astronaut never fade—no matter how many times she’s told no.

This historical middle-grade novel is told in poems from Mimi’s perspective over the course of one year in her new town, and shows readers that positive change can start with just one person speaking up.” 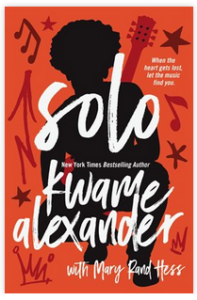 “Solo tells the story of seventeen-year-old Blade Morrison, who knows the life of a rock star isn’t really about the glitz and glamour. All the new cars and money in the world can’t make up for the scathing tabloid covers or the fact that his father is struggling with just about every addiction under the sun-including a desperate desire to make a comeback and regain his former fame. Haunted by memories of his mother-who died when Blade was nine-and the ruin his father’s washed-up legacy and life have brought to the family, Blade is left to figure out life on his own. But, he’s not all alone: He’s got the friendship of a jazz-musician mentor, Robert; the secret love of a girlfriend, Chapel; and his music. All may not be well in the Morrison home, but things are looking up for Blade, until he discovers a deeply protected family secret-one that further threatens his relationship with his family and has him questioning his own identity. Thrown into a tailspin, Blade decides the only way he will understand his past and begin his future is to find out the truth behind the music and himself. He soon sets out on a journey that will change everything he thought to be true. His quest lands him in Ghana, stuck in a village just shy of where answers to the secret can be found. There, Blade discovers a friendship he couldn’t have imagined, a people founded in family and community, and a reconciliation he never expected. With his signature intricacy, intimacy, and poetic style, Kwame Alexander explores what it means to finally come home.”

Available as an ebook on Hoopla. Also available: Swing. 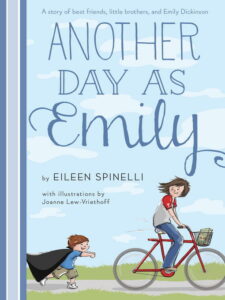 Another Day as Emily – Joanne Lew-Vriethoff

“Eleven-year-old Suzy just can’t win. Her brother is a local hero for calling 911 after seeing their elderly neighbor collapse, and only her best friend was able to win a role in the play they both auditioned for. Feeling cast aside from all angles, Suzy sees a kindred spirit in Emily Dickinson, the subject of her summer project. Suzy decides to escape from her disappointments by emulating the poet’s life of solitude: no visitors or phone calls (only letters delivered through her window), no friends (except her goldfish, Ottilie), and no outings (except church, but only if she can wear her long white Emily dress).

But being a recluse is harder than Suzy predicted. Will she find a way to fold Emily into her life while also remaining true to herself?” 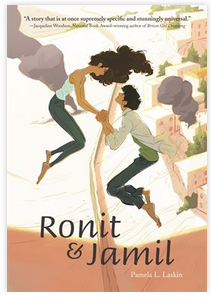 “Pamela L. Laskin’s beautiful and lyrical novel in verse delivers a fresh and captivating retelling of Shakespeare’s Romeo and Juliet that transports the star-crossed lovers to the modern-day Israel-Palestine conflict.

Ronit, an Israeli girl, lives on one side of the fence. Jamil, a Palestinian boy, lives on the other side. Only miles apart but separated by generations of conflict-much more than just the concrete blockade between them. Their fathers, however, work in a distrusting but mutually beneficial business arrangement, a relationship that brings Ronit and Jamil together. And lightning strikes. The kind of lightning that transcends barrier fences, war, and hatred.

The teenage lovers fall desperately into the throes of forbidden love, one that would create an irreparable rift between their families if it were discovered. But a love this big can only be kept secret for so long. Ronit and Jamil must face the fateful choice to save their lives or their loves, as it may not be possible to save both.”

Available as an ebook on Hoopla. 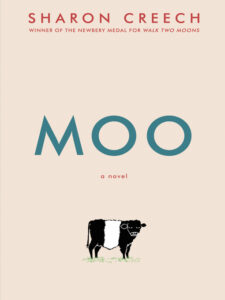 “Fans of Newbery Medal winner Sharon Creech’s Love That Dog and Hate That Cat will love her newest tween novel, Moo. Following one family’s momentous move from the city to rural Maine, an unexpected bond develops between twelve-year-old Reena and one very ornery cow.

When Reena, her little brother, Luke, and their parents first move to Maine, Reena doesn’t know what to expect. She’s ready for beaches, blueberries, and all the lobster she can eat. Instead, her parents “volunteer” Reena and Luke to work for an eccentric neighbor named Mrs. Falala, who has a pig named Paulie, a cat named China, a snake named Edna—and that stubborn cow, Zora.” 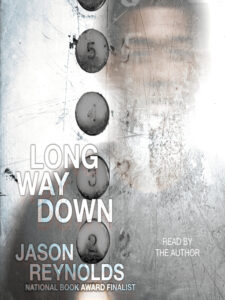 “Will’s older brother, Shawn, has been shot.
Dead.
Will feels a sadness so great, he can’t explain it. But in his neighborhood, there are THE RULES:

But bullets miss. You can get the wrong guy. And there’s always someone else who knows to follow the rules…”

Available as an e-audiobook and ebook on Overdrive.