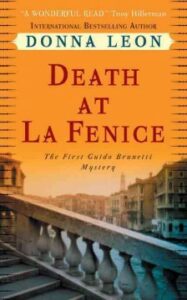 I have Harper Perennial’s Olive Editions to thank for the prompting nudge to finally start this series. That shorter than the typical mass market paperback, nicely typeset, drenched-in-red edition of Death at La Fenice caught my eye, but after finishing the series opener, it was Brunetti who drew me back to Donna Leon’s Venice.

Guido Brunetti is a smart, well-intentioned man determined to carry out his duty while fighting against a tide of corruption and the overwhelming perfidy of individuals in/with power. His humor tends to be dry, his love for his family and his city absolute, his bearing solid and quiet. And my fondness for him grew by the page.

Venice is, of course, another strong draw and prevailing reason to sink into the series (certainly for those of us prone to wanderlust). Leon’s characters often find themselves at a family dinner table, stepping up to a bar, or sitting down in a restaurant to share information. The food descriptions range from mundane to mouthwatering, a distinct problem if you come to the book hungry, but it’s the many, many mentions of coffee that inevitably make me yearn for a seat at a waterside café. Venice isn’t presented as an ideal or idyll, Brunetti walks the calli aware of the problematic aspects of the city’s nature and government, but how it shines in the right light.

What I see as one of the series’ strengths—namely, the resolution of the crime is never neat or tidy; in certain installments, serving as a reflection of reality, there’s hardly a resolution at all to speak of (e.g. guilty parties slip justice’s knot)—is also the chief drawback/source of dissatisfaction stated in reader reviews. This is not a mystery series for readers whose enjoyment hinges on a bow-wrapped resolution. (It’s worth noting that as frustrated as readers are with how some of his cases conclude, Brunetti is, too, if even moreso.) But for those who read the first book and think More!, consider your reading list sorted for a while to come: The number of books in the series currently stands at 29.

About Death at La Fenice, from the publisher:

“During intermission at the famed La Fenice opera house in Venice, Italy, a notoriously difficult and widely disliked German conductor is poisoned—and suspects abound. Guido Brunetti, a native Venetian, sets out to unravel the mystery behind the high-profile murder. To do so, he calls on his knowledge of Venice, its culture, and its dirty politics. Along the way, he finds the crime may have roots going back decades—and that revenge, corruption, and even Italian cuisine may play a role.”

Death at La Fenice is available in print and as an e-book.