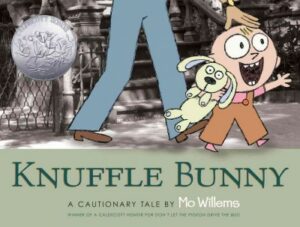 As a young child I adored picture books. Now my niece, who has recently turned three has picked up an interest in reading. The books illustrated and written by Mo Willems have been among my favorites that I’ve come across while in my travels through the children’s room at the library. I have seen his books come across the desk frequently, but I had never paused to read any for myself. But that changed when I happened to pick up The Pigeon Finds a Hot Dog and found myself amused by the illustrations and story put together by Willems.

Mo Willems was born in Des Plaines, Illinois in 1968 and now lives in Massachusetts. When he was about four years old he began to draw and create his own characters. Because he enjoyed writing stories about his characters, he decided he would like to share them with others. Since 2003, Willems has authored multiple books for children, three of which have been awarded a Caldecott Honor. He has also written a series called Elephant and Piggie, books which have won the Theodor Seuss Geisel Medal in both 2008 and 2009.

Willems writes books that children find relatable because children around the age of 4 or 5 are asking truly large, philosophical questions. As Willems mentioned in an interview, ”You have to think the deep thoughts because that’s the philosophical age,” Willems replied. “A five-year-old is asking questions: Why are people mean? What is death? Can I drive a bus? I mean, these really deep, deep thoughts,” and so as an illustrator and author that is the type of book he strives to write. He also has books that tackle bullying, friendship, and little things like getting dressed.

Among my favorite books by Mo Willems are:

I would recommend these to any child or adult who wants to relax with a bit of humor to brighten the somewhat dark days we’ve all been living through recently.