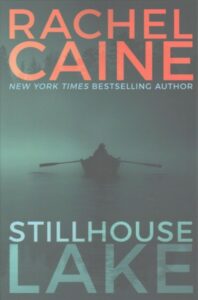 It’s October and it’s time to settle in for some spooky reads as the Halloween season kicks off and there’s no better way to start your season than with Stillhouse Lake by Rachel Caine. The first of a four-novel series, Stillhouse Lake follows Gina Royal, a woman forced to run from her past and reinvent herself when it’s revealed that her perfect life wasn’t really as sublime as she believed. When a car accident reveals her husband’s gruesome alter ego as a serial killer, Gina takes up the name Gwen Proctor and rushes her two children across the country in an effort to escape the vicious internet trolls seeking to torment the wife and children of a notorious killer. Multiple moves because of paranoia and valid threats have kept Gwen and her kids on the run, but they’ve finally settled in Stillhouse Lake. Things seem to be looking up for Gwen and her family at this small town, and they’ve even begun to settle in and fix up their house. But as Gwen knows, getting too settled can lead to risks and as a body surfaces in the lake, Gwen will have to grapple with a new set of complications.

Rachel Caine’s writing evokes powerful imagery while reading, giving the reader a haunting sense of what it must be like to live as Gwen does. As a reader you feel Gwen’s paranoia, fear, and anger right along with her. This is the perfect read for anyone who happens to be a fan of murder mysteries or something spooky.

Along with Stillhouse Lake, Caine has also written Killman Creek which is the direct follow up to the first novel. I highly recommend that you grab a warm drink, a blanket, and dim the lights to imagine your path through this mystery.