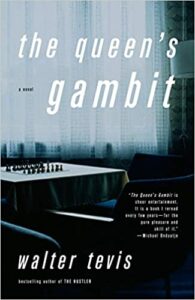 I read this book many years ago, and while not being a big fan of the game  of chess, I do remember how much I enjoyed the book. After watching the recent Netflix series based on this book, I decided to read it again. The book is about chess but also about the resilience of the main character Beth Harmon. Orphaned at a young age, she finds an escape from her dreary life in learning to play chess with the custodian at the orphanage school. Getting adopted was only the first step in overcoming her pitiful past. Through her prowess at the game of chess she is has an adventurous life that she never imagined. The TV series was a wonderful adaptation and did the book justice.

About The Queen’s Gambit:

“Eight year-old orphan Beth Harmon is quiet, sullen, and by all appearances unremarkable. That is, until she plays her first game of chess. Her senses grow sharper, her thinking clearer, and for the first time in her life she feels herself fully in control. By the age of sixteen, she’s competing for the U.S. Open championship. But as Beth hones her skills on the professional circuit, the stakes get higher, her isolation grows more frightening, and the thought of escape becomes all the more tempting.”