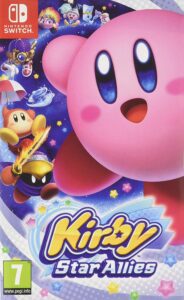 Kirby games exist at the golden mean of relaxing gameplay for me. Not too violent but not too sedate. Not too daunting but not too simple. You get the sense that even Kirby’s enemies don’t mind getting a bop on the head by a mallet or parasol. It’s all in good fun.

In Kirby Star Allies, you can play with up to 3 CPU or human helper characters. Along with Kirby’s classic power-inhaling-and-adopting ability, you can mix and match the abilities of your friends for added benefit. For instance, you can overcome a fire obstacle if you had previously imbued your Blade Knight sword with Burning Leo’s fire, or turn on an electric switch if you’ve electrified your hammer with Waddle Doo. It’s a fun twist on Kirby’s old powers and a neat way to set up puzzles.

Star Allies is not a particularly difficult or deep game which I can see hurting its replay value (though we hope you will borrow and renew it again and again). But I don’t play Kirby games for the story or slog. What I want is a low stakes, low blood pressure romp with a little victory dance at the end. In that sense, Kirby Star Allies delivers.