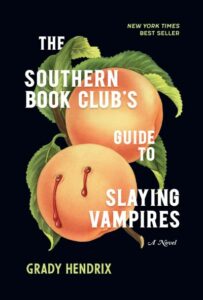 I’ve been, shall we say… intrigued by the book cover for The Southern Book Club’s Guide to Slaying Vampires since I first heard about it back in February, and then even more so when I realized that Grady Hendrix was the author of a handful of books that have piqued my interest on more than one occasion (including My Best Friend’s Exorcism, We Sold Our Souls, Horrorstör, and Paperbacks from Hell). I borrowed the book from the library sometime in August but never got around to actually reading it until I needed a palate cleanser between How to Be an Antiracist and The New Jim Crow.

But, like all good books, I shouldn’t have waited so long.

With a title like The Southern Book Club’s Guide to Slaying Vampires, it’s not a surprise when a vampire eventually shows up—nor is it entirely unwarranted when Patricia assumes her strange new neighbor might actually be one. (This is fiction after all.) But, like all my favorite vampire novels, the best part isn’t just the gory, blood-soaked standoff at the end: it’s the little moments that lead you there and all the second-guessing along the way.

One of my favorite parts was the true-crime book club Patricia starts with some of the other housewives in her neighborhood. The club forms the backbone of the novel and, once its overtaken by the women’s husbands and blown up into a town-wide social affair, just another metaphorical thread that ties the plot together. There’s a lot of icky, not great stuff that happens throughout the novel, but one of the worst involved all the husbands forcing their wives—after said wives believed and supported Patricia against James Harris—to not only apologize but also embrace him as one of their own. The amount of manipulation and gaslighting that occurred just put this pit in my stomach that only went away at the end (in, yes, a very satisfying gory, blood-soaked standoff).

The Southern Book Club’s Guide to Slaying Vampires is a long book at just over 400 pages but, by the last third or fourth, I found myself curled up on the sofa in a reading cocoon, content to only get up once I’d finished. It’s a genre book but also not one, too. Hendrix writes in his author’s note that “when I was a kid I didn’t take my mom seriously” and I found myself returning to the quote at the end. There are so many instances where Patricia isn’t taken seriously as a woman, as a wife, as a mother, or as a friend; where her mother-in-law, Ruth, is brushed off as senile; or where Ruth’s caretaker, Mrs. Greene, is silenced because of her skin color and where she lives… and then so many instances where all three women are proved correct.

It might have taken Patricia a little longer than I’d hoped for her to put her foot down and for Patricia’s husband and neighbor to get what they deserved… but, oh, what a comeuppance.