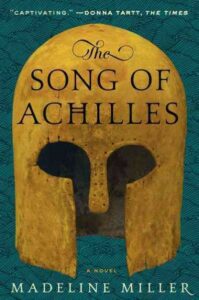 Epic tales of love are a theme that often wind their way through literature, inspiring future writers to craft romances that capture readers and allow them to join the characters on their journey. The epic Greek myth of Achilles and Patroclus is one that is often alluded to as a deep friendship between the son of a Goddess and an exiled prince, but in Madeline Miller’s The Song of Achilles, the reader is given a romance born of friendship and undying loyalty. If Greek mythology is of any interest to you, then there is nothing quite as intriguing and emotionally moving as this novel.

Madeline Miller took this old myth and wove an intricate and beautiful relationship that spans the decades that these two boys spent together, eventually growing into young men who wound up fighting a war that had little to do with them. After having read Madeline Miller’s other novel Circe, I knew that I would be in for an emotional ride but I had no idea that by the end of The Song of Achilles I would be nearly inconsolable and in tears.

Those who have read my reviews before know that I tend to become heavily invested in LGBTQ+ YA literature but this was my first LGBTQ+ Adult fiction novel in some time where I could not put it down. I finished this novel in one day simply because the story of Patroclus and Achilles was so gripping. It was truly a novel that I was engrossed in from page one until well after I had closed the book.

Well worth the read, Madeline Miller delivers a romance that is sure to last as the years pass. This is a book I will think about frequently as I move on to other reads.