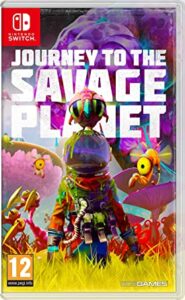 If Tim and Eric made Metroid, you would get Journey to the Savage Planet. You play as a nameless goon sent to explore a thought-to-be-uninhabited planet by the proudly “fourth best” interplanetary exploration company. Surprise, the planet is very much teeming with life so your mission becomes to determine what exactly is living there.

To give you an idea of what constitutes “exploration” on this planet, one way to level up your character is to dropkick the local fauna off a cliff.

The world is enormous! So much so that one easy way to get from one point to another is to simply hurl yourself down a pit and brake at the last second with your rocket boots (you did get the double jump upgrade first, right?). The sheer bigness of the levels makes you feel like you’ve covered a significant distance. There are lots of collectables, secret transmissions, puzzles, scans, and odd commercials to keep you busy if you’re a video game completist.

If you want a less frustrating time, don’t focus on the main quest to the detriment of the side quests (or “science experiments”) that lead to your gear upgrades. You certainly can beat the final boss with a barely upgraded pistol and only the double-jump, but in retrospect it was a far more frustrating experience than I wished it was. Plus I missed out on exploring some interesting nooks and crannies.

Combat, though definitely not the focus of the game, can get a little monotonous. You only get one gun and there isn’t much variety in the regular enemies. The boss fights tend to be more dynamic.

It’s a game with a lot of personality and very good at getting you hooked with the “just one more waypoint” urge to play.