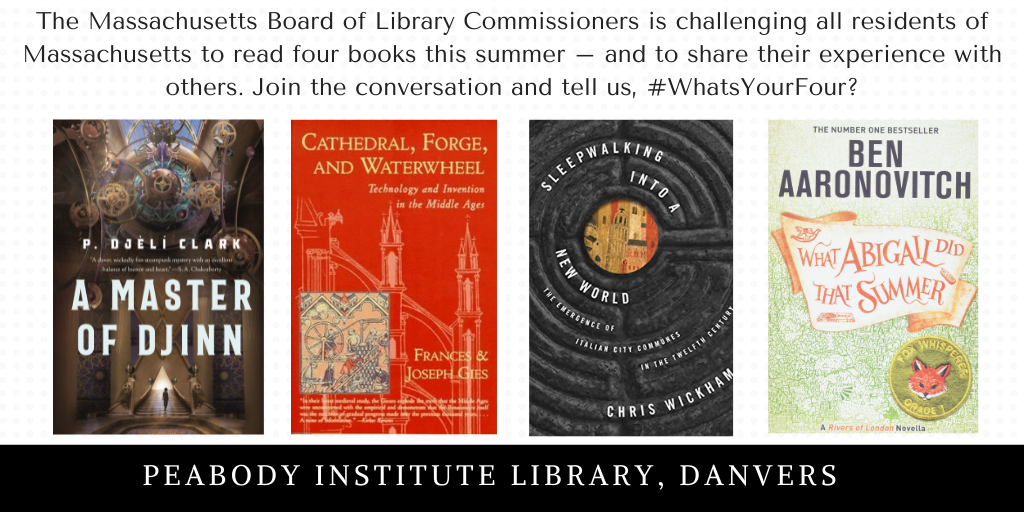 A Master of Djinn – P. Djeli Clark
“Cairo, 1912: Though Fatma el-Sha’arawi is the youngest woman working for the Ministry of Alchemy, Enchantments and Supernatural Entities, she’s certainly not a rookie, especially after preventing the destruction of the universe last summer.

So when someone murders a secret brotherhood dedicated to one of the most famous men in history, al-Jahiz, Agent Fatma is called onto the case. Al-Jahiz transformed the world forty years ago when he opened up the veil between the magical and mundane realms, before vanishing into the unknown. This murderer claims to be al-Jahiz, returned to condemn the modern age for its social oppressions. His dangerous magical abilities instigate unrest in the streets of Cairo that threaten to spill over onto the global stage.

Alongside her Ministry colleagues and a familiar person from her past, Agent Fatma must unravel the mystery behind this imposter to restore peace to the city―or face the possibility he could be exactly who he seems…”

Cathedral, Forge, and Waterwheel – Frances Gies
“In this account of Europe’s rise to world leadership in technology, Frances and Joseph Gies show how early modern technology and experimental science were direct outgrowths of the decisive innovations of medieval Europe, in the tools and techniques of agriculture, craft industry, metallurgy, building construction, navigation, and war. The Gieses report that many of Europe’s most important inventions—the horse harness, the stirrup, the magnetic compass, cotton and silk cultivation and manufacture, papermaking, firearms, and “Arabic” numerals—had their origins outside Europe, in China, India, and the Middle East. Europe synthesized its own innovations—the three-field system, water power in industry, the full-rigged ship, the putting-out system—into a powerful new combination of technology, economics, and politics.”

Sleepwalking Into a New World – Chris Wickham
“Amid the disintegration of the Kingdom of Italy in the eleventh and twelfth centuries, a new form of collective government―the commune―arose in the cities of northern and central Italy. Sleepwalking into a New World takes a bold new look at how these autonomous city-states came about, and fundamentally alters our understanding of one of the most important political and cultural innovations of the medieval world.

Chris Wickham provides richly textured portraits of three cities―Milan, Pisa, and Rome―and sets them against a vibrant backcloth of other towns. He argues that, in all but a few cases, the elites of these cities and towns developed one of the first nonmonarchical forms of government in medieval Europe, unaware that they were creating something altogether new. Wickham makes clear that the Italian city commune was by no means a democracy in the modern sense, but that it was so novel that outsiders did not know what to make of it. He describes how, as the old order unraveled, the communes emerged, governed by consular elites “chosen by the people,” and subject to neither emperor nor king. They regularly fought each other, yet they grew organized and confident enough to ally together to defeat Frederick Barbarossa, the German emperor, at the Battle of Legnano in 1176.

Sleepwalking into a New World reveals how the development of the autonomous city-state took place, which would in the end make possible the robust civic culture of the Renaissance.”

What Abigail Did that Summer – Ben Aaronovitch
“Ghost hunter, fox whisperer, troublemaker. It is the summer of 2013 and Abigail Kamara has been left to her own devices. This might, by those who know her, be considered a mistake. While her cousin, police constable and apprentice wizard Peter Grant, is off in the sticks chasing unicorns Abigail is chasing her own mystery. Teenagers around Hampstead Heath have been going missing but before the police can get fully engaged the teens return home—unharmed but vague about where they’ve been. Aided only by her new friend Simon, her knowledge that magic is real and a posse of talking foxes that think they’re spies, Abigail must venture into the wilds of Hampstead to discover who is luring the teenagers and more importantly—why?”