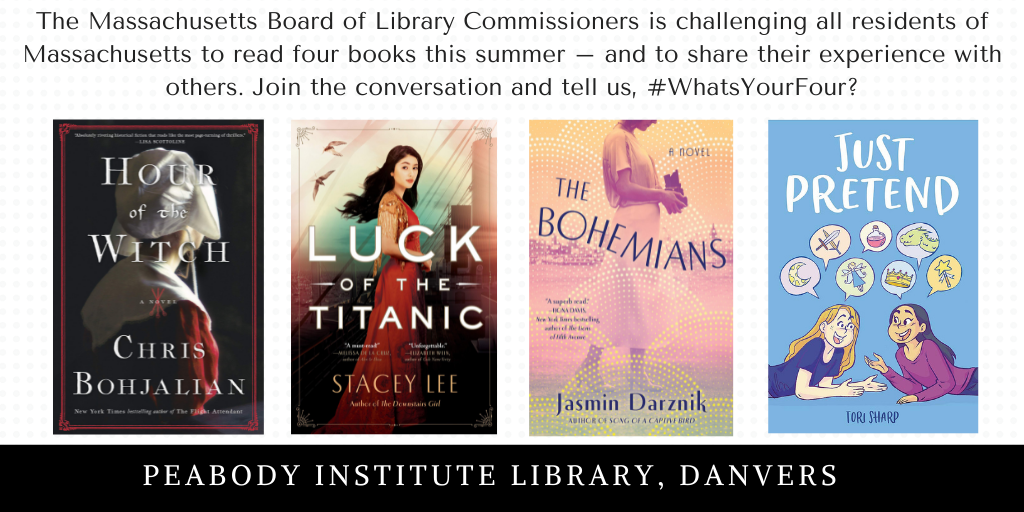 Hour of the Witch – Chris Bohjalian
“Boston, 1662. Mary Deerfield is twenty-four-years-old. Her skin is porcelain, her eyes delft blue, and in England she might have had many suitors. But here in the New World, amid this community of saints, Mary is the second wife of Thomas Deerfield, a man as cruel as he is powerful. When Thomas, prone to drunken rage, drives a three-tined fork into the back of Mary’s hand, she resolves that she must divorce him to save her life.

But in a world where every neighbor is watching for signs of the devil, a woman like Mary—a woman who harbors secret desires and finds it difficult to tolerate the brazen hypocrisy of so many men in the colony—soon becomes herself the object of suspicion and rumor. When tainted objects are discovered buried in Mary’s garden, when a boy she has treated with herbs and simples dies, and when their servant girl runs screaming in fright from her home, Mary must fight to not only escape her marriage, but also the gallows.”

Luck of the Titanic – Stacey Lee
“Valora Luck has two things: a ticket for the biggest and most luxurious ocean liner in the world, and a dream of leaving England behind and making a life for herself as a circus performer in New York. Much to her surprise though, she’s turned away at the gangway; apparently, Chinese aren’t allowed into America.

But Val has to get on that ship. Her twin brother Jamie, who has spent two long years at sea, is there, as is an influential circus owner, whom Val hopes to audition for. Thankfully, there’s not much a trained acrobat like Val can’t overcome when she puts her mind to it.

As a stowaway, Val should keep her head down and stay out of sight. But the clock is ticking and she has just seven days as the ship makes its way across the Atlantic to find Jamie, perform for the circus owner, and convince him to help get them both into America.

Then one night the unthinkable happens, and suddenly Val’s dreams of a new life are crushed under the weight of the only thing that matters: survival.”

The Bohemians – Jasmin Darznik
“In 1918, a young and bright-eyed Dorothea Lange steps off the train in San Francisco, where a disaster kick-starts a new life. Her friendship with Caroline Lee, a vivacious, straight-talking Chinese American with a complicated past, gives Dorothea entrée into Monkey Block, an artists’ colony and the bohemian heart of the city. Dazzled by Caroline and her friends, Dorothea is catapulted into a heady new world of freedom, art, and politics. She also finds herself unexpectedly falling in love with the brilliant but troubled painter Maynard Dixon. Dorothea and Caroline eventually create a flourishing portrait studio, but a devastating betrayal pushes their friendship to the breaking point and alters the course of their lives.

The Bohemians captures a glittering and gritty 1920s San Francisco, with a cast of unforgettable characters, including cameos from such legendary figures as Mabel Dodge Luhan, Frida Kahlo, Ansel Adams, and D. H. Lawrence. A vivid and absorbing portrait of the past, it is also eerily resonant with contemporary themes, as anti-immigration sentiment, corrupt politicians, and a devastating pandemic bring tumult to the city—and the gift of friendship and the possibility of self-invention persist against the ferocious pull of history.

As Dorothea sheds her innocence, her purpose is awakened and she grows into the figure we know from history—the artist whose iconic Depression-era photographs like “Migrant Mother” broke the hearts and opened the eyes of a nation.”

Since her parents’ divorce, she’s lived in both her mom’s house and her dad’s new apartment. And in both places, no matter how hard she tries, her family still treats her like a little kid. Then there’s school, where friendships old and new are starting to feel more and more out of her hands.

Thankfully, she has books-and writing. And now the stories she makes up in her head just might save her when everything else around her—friendships, school, family—is falling apart.

Author Tori Sharp takes us with her on a journey through the many commonplace but complex issues of fractured families, as well as the beautiful fantasy narrative that helps her cope, gorgeously illustrated and full of magic, fairies, witches and lost and found friendships.”