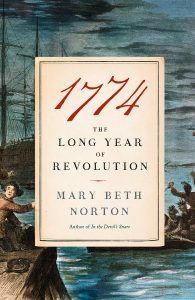 “In this masterly work of history, the culmination of more than four decades of research and thought, Mary Beth Norton looks at the sixteen months leading up to the clashes at Lexington and Concord in mid-April 1775. This was the critical, and often overlooked, period when colonists traditionally loyal to King George III began their discordant “discussions” that led them to their acceptance of the inevitability of war against the British Empire. Drawing extensively on pamphlets, newspapers, and personal correspondence, Norton reconstructs colonial political discourse as it took place throughout 1774. Late in the year, conservatives mounted a vigorous campaign criticizing the First Continental Congress. But by then it was too late. In early 1775, colonial governors informed officials in London that they were unable to thwart the increasing power of local committees and their allied provincial congresses. Although the Declaration of Independence would not be formally adopted until July 1776, Americans had in effect “declared independence ” even before the outbreak of war in April 1775 by obeying the decrees of the provincial governments they had elected rather than colonial officials appointed by the king. Norton captures the tension and drama of this pivotal year and foundational moment in American history and brings it to life as no other historian has done before.” 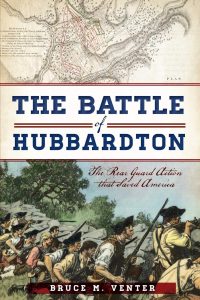 British and German troops ran into stubborn rebel resistance at Hubbardton, Vermont, on July 7, 1777. The day would ultimately turn the tide for the Patriot cause. After capturing Fort Ticonderoga, the British, under Lieutenant General John Burgoyne, pursued a retreating Continental army under Major General Arthur St. Clair. In the fields and hills around Hubbardton, a tenacious American rear guard of about 1,200 derailed the British general’s plan for a quick march to Albany. The British won a tactical victory, but they suffered precious losses. Patriots, under Colonel Seth Warner, Colonel Ebenezer Francis and Colonel Nathan Hale, left the British and Germans bloodied while also saving untold casualties from their own army. Burgoyne and his weakened force ultimately surrendered at Saratoga on October 17, 1777, paving the way for a French alliance with the colonies and American independence.