My current TBR stack is a little unusual for me – two non-fiction and only one fiction. 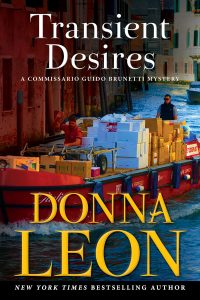 I love mysteries, and I have Donna Leon’s latest, Transient Desires, right at the top of my stack.

“In his many years as a commissario, Guido Brunetti has seen all manner of crime and known intuitively how to navigate the various pathways in his native city, Venice, to discover the person responsible. Now, in Transient Desires, the thirtieth novel in Donna Leon’s masterful series, he faces a heinous crime committed outside his jurisdiction. He is drawn in innocently enough: two young American women have been badly injured in a boating accident, joy riding in the Laguna with two young Italians. However, Brunetti’s curiosity is aroused by the behavior of the young men, who abandoned the victims after taking them to the hospital. If the injuries were the result of an accident, why did they want to avoid association with it?

As Brunetti and his colleague, Claudia Griffoni, investigate the incident, they discover that one of the young men works for a man rumored to be involved in more sinister nighttime activities in the Laguna. To get to the bottom of what proves to be a gut-wrenching case, Brunetti needs to enlist the help of both the Carabinieri and the Guardia di Costiera. Determining how much trust he and Griffoni can put in these unfamiliar colleagues adds to the difficulty of solving a peculiarly horrible crime whose perpetrators are technologically brilliant and ruthlessly organized.

Donna Leon’s Transient Desires is as powerful as any novel she has written, testing Brunetti to his limits and forcing him to listen very carefully for the truth.” 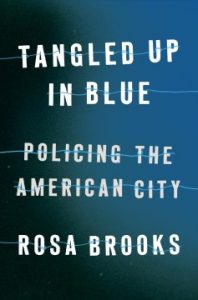 But, before I could get to that, another book from my hold list arrived: Tangled Up in Blue: Policing the American City. After hearing the author interviewed on NPR’s Fresh Air, I had reserved a copy of this new book on understanding police reform. My dad was a police officer, so I’m particularly interested in how it depicts what police are doing right and what they might do better. (Here’s a link to the Fresh Air interview, which is interesting on its own.)

“In her forties, with two children, a spouse, a dog, a mortgage, and a full-time job as a tenured law professor at Georgetown University, Rosa Brooks decided to become a cop. A liberal academic and journalist with an enduring interest in law’s troubled relationship with violence, Brooks wanted the kind of insider experience that would help her understand how police officers make sense of their world—and whether that world can be changed. In 2015, against the advice of everyone she knew, she applied to become a sworn, armed reserve police officer with the Washington, DC, Metropolitan Police Department.

Then as now, police violence was constantly in the news. The Black Lives Matter movement was gaining momentum, protests wracked America’s cities, and each day brought more stories of cruel, corrupt cops, police violence, and the racial disparities that mar our criminal justice system. Lines were being drawn, and people were taking sides. But as Brooks made her way through the police academy and began work as a patrol officer in the poorest, most crime-ridden neighborhoods of the nation’s capital, she found a reality far more complex than the headlines suggested.

In Tangled Up in Blue, Brooks recounts her experiences inside the usually closed world of policing. From street shootings and domestic violence calls to the behind-the-scenes police work during Donald Trump’s 2016 presidential inauguration, Brooks presents a revelatory account of what it’s like inside the “blue wall of silence.” She issues an urgent call for new laws and institutions, and argues that in a nation increasingly divided by race, class, ethnicity, geography, and ideology, a truly transformative approach to policing requires us to move beyond sound bites, slogans, and stereotypes. An explosive and groundbreaking investigation, Tangled Up in Blue complicates matters rather than simplifies them, and gives pause both to those who think police can do no wrong—and those who think they can do no right.” 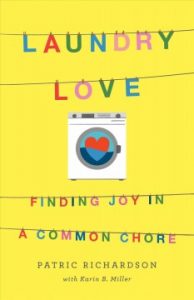 And finally, something light and fun. In the May issue of NOBLE’s Home, Garden, and DIY Book list, this caught my eye: Laundry Love: Finding Joy in a Common Chore. It promises personal stories, more than I ever wanted to know about laundry, and some laughs besides. How could I resist?

“Doing laundry is rarely anyone’s favorite task. But to Patric Richardson, laundry isn’t just fun―it’s a way of life. After years of running Laundry Camp at the Mall of America for thousands of eager learners, he’s ready to share his tips, tricks, and hacks―bringing surprise and delight to this commonly dreaded chore.

Sorting your laundry? It’s not all about whites and darks. Pondering the wash cycles? Every load, even your delicates, should be washed using express or quick-wash on warm. Facing expensive dry cleaning bills? You’ll learn how to wash everything―yes everything―at home. And those basically clean but smelly clothes? Richardson has a secret for freshening those too (hint: it involves vodka, not soap).

Changing your relationship with laundry can also change your life. Richardson’s handy advice shows us how to save time and money (and the planet!) with our laundry―and he intersperses it all with a healthy dose of humor, real-life laundry stories, and lessons from his Appalachian upbringing and career in fashion.

Laundry Love will make you wonder why you ever stressed about ironing, dry cleaning, or (god forbid) red wine spills on your new couch. No matter the issue, Richardson is here to help you make laundry miracles happen―wrinkles and stains be damned.”