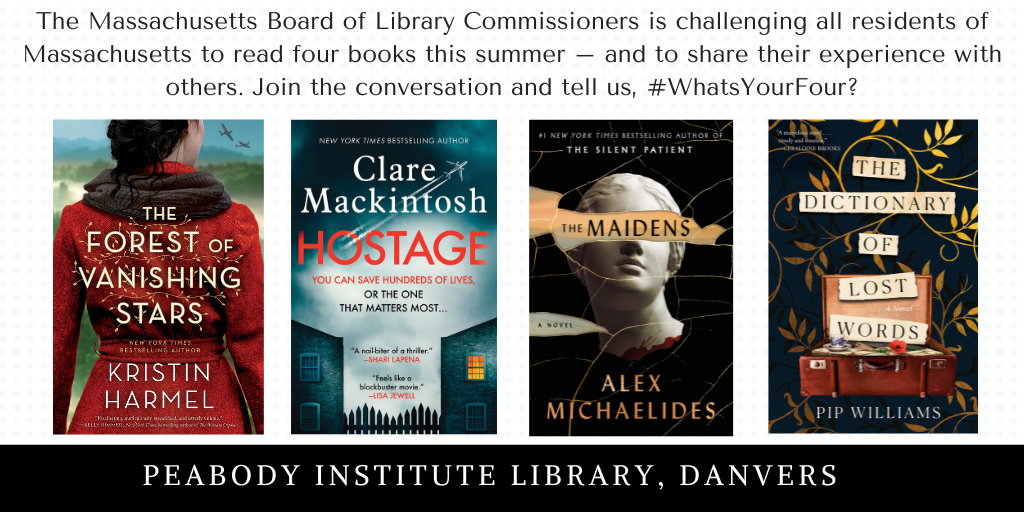 The Forest of Vanishing Stars – Kristin Harmel
“After being stolen from her wealthy German parents and raised in the unforgiving wilderness of eastern Europe, a young woman finds herself alone in 1941 after her kidnapper dies. Her solitary existence is interrupted, however, when she happens upon a group of Jews fleeing the Nazi terror. Stunned to learn what’s happening in the outside world, she vows to teach the group all she can about surviving in the forest—and in turn, they teach her some surprising lessons about opening her heart after years of isolation. But when she is betrayed and escapes into a German-occupied village, her past and present come together in a shocking collision that could change everything.”

Mina is trying to focus on her job as a flight attendant, not the problems with her five-year-old daughter back home, or the fissures in her marriage. But the plane has barely taken off when Mina receives a chilling note from an anonymous passenger, someone intent on ensuring the plane never reaches its destination: “The following instructions will save your daughter’s life…”

Someone needs Mina’s assistance and knows exactly how to make her comply.

When one passenger is killed and then another, Mina knows she must act. But which lives does she save: Her passengers…or her own daughter and husband who are in grave distress back at home?”

The Maidens – Alex Michaelides
“Edward Fosca is a murderer. Of this Mariana is certain. But Fosca is untouchable. A handsome and charismatic Greek tragedy professor at Cambridge University, Fosca is adored by staff and students alike―particularly by the members of a secret society of female students known as The Maidens.

Mariana Andros is a brilliant but troubled group therapist who becomes fixated on The Maidens when one member, a friend of Mariana’s niece Zoe, is found murdered in Cambridge.

Mariana, who was once herself a student at the university, quickly suspects that behind the idyllic beauty of the spires and turrets, and beneath the ancient traditions, lies something sinister. And she becomes convinced that, despite his alibi, Edward Fosca is guilty of the murder. But why would the professor target one of his students? And why does he keep returning to the rites of Persephone, the maiden, and her journey to the underworld?

When another body is found, Mariana’s obsession with proving Fosca’s guilt spirals out of control, threatening to destroy her credibility as well as her closest relationships. But Mariana is determined to stop this killer, even if it costs her everything―including her own life.”

The Dictionary of Lost Words – Pip Williams
“Esme is born into a world of words. Motherless and irrepressibly curious, she spends her childhood in the Scriptorium, a garden shed in Oxford where her father and a team of dedicated lexicographers are collecting words for the very first Oxford English Dictionary. Young Esme’s place is beneath the sorting table, unseen and unheard. One day a slip of paper containing the word bondmaid flutters beneath the table. She rescues the slip, and when she learns that the word means “slave girl,” she begins to collect other words that have been discarded or neglected by the dictionary men.

As she grows up, Esme realizes that words and meanings relating to women’s and common folks’ experiences often go unrecorded. And so she begins in earnest to search out words for her own dictionary: the Dictionary of Lost Words. To do so she must leave the sheltered world of the university and venture out to meet the people whose words will fill those pages.”