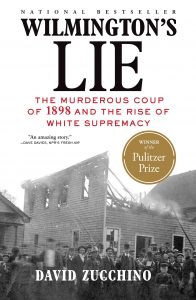 Wilmington’s Lie: the Murderous Coup of 1898 and the Rise of White Supremacy – David Zucchino.

I won’t lie, there are no silver linings in this work of nonfiction. It is the unflinching and highly readable account of a well planned overthrow of the Republican government in Wilmington, North Carolina by the local Democrats. There was straight out murder of black residents, ballot box stuffing, intimidation and good old-fashioned running folks out of town. This is the only ever successful coup of an established government in the United States and one that everyone should know happened. Survivors who tried to get the attention of the federal government about this matter were ignored. It is meticulously researched and an important work of history.