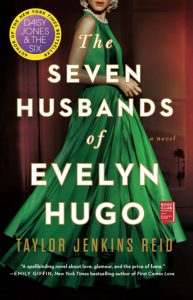 The Seven Husbands of Evelyn Hugo by Taylor Jenkins Reid
“Aging and reclusive Hollywood movie icon Evelyn Hugo is finally ready to tell the truth about her glamorous and scandalous life. But when she chooses unknown magazine reporter Monique Grant for the job, no one is more astounded than Monique herself. Why her? Why now?

Monique is not exactly on top of the world. Her husband has left her, and her professional life is going nowhere. Regardless of why Evelyn has selected her to write her biography, Monique is determined to use this opportunity to jumpstart her career.

Summoned to Evelyn’s luxurious apartment, Monique listens in fascination as the actress tells her story. From making her way to Los Angeles in the 1950s to her decision to leave show business in the ‘80s, and, of course, the seven husbands along the way, Evelyn unspools a tale of ruthless ambition, unexpected friendship, and a great forbidden love. Monique begins to feel a very real connection to the legendary star, but as Evelyn’s story near its conclusion, it becomes clear that her life intersects with Monique’s own in tragic and irreversible ways.” 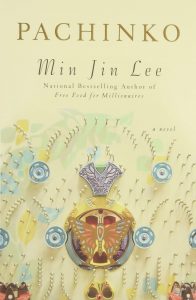 Pachinko by Min Jin Lee
“In the early 1900s, teenaged Sunja, the adored daughter of a crippled fisherman, falls for a wealthy stranger at the seashore near her home in Korea. He promises her the world, but when she discovers she is pregnant–and that her lover is married–she refuses to be bought. Instead, she accepts an offer of marriage from a gentle, sickly minister passing through on his way to Japan. But her decision to abandon her home, and to reject her son’s powerful father, sets off a dramatic saga that will echo down through the generations.

Richly told and profoundly moving, Pachinko is a story of love, sacrifice, ambition, and loyalty. From bustling street markets to the halls of Japan’s finest universities to the pachinko parlors of the criminal underworld, Lee’s complex and passionate characters–strong, stubborn women, devoted sisters and sons, fathers shaken by moral crisis–survive and thrive against the indifferent arc of history.” 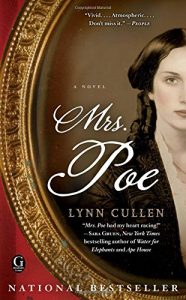 Mrs. Poe by Lynn Cullen
“1845: New York City is a sprawling warren of gaslit streets and crowded avenues, bustling with new immigrants and old money, optimism and opportunity, poverty and crime. Edgar Allan Poe’s “The Raven” is all the rage—the success of which a struggling poet like Frances Osgood can only dream. As a mother trying to support two young children after her husband’s cruel betrayal, Frances jumps at the chance to meet the illustrious Mr. Poe at a small literary gathering, if only to help her fledgling career. Although not a great fan of Poe’s writing, she is nonetheless overwhelmed by his magnetic presence—and the surprising revelation that he admires her work.

What follows is a flirtation, then a seduction, then an illicit affair…and with each clandestine encounter, Frances finds herself falling slowly and inexorably under the spell of her mysterious, complicated lover. But when Edgar’s frail wife, Virginia, insists on befriending Frances as well, the relationship becomes as dark and twisted as one of Poe’s tales. And like those gothic heroines whose fates are forever sealed, Frances begins to fear that deceiving Mrs. Poe may be as impossible as cheating death itself…” 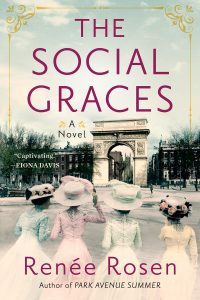 Social Graces by Renee Rosen
“1876. In the glittering world of Manhattan’s upper crust, women are valued by their pedigree, dowry, and, most importantly, connections. They have few rights and even less independence—what they do have is society. The more celebrated the hostess, the more powerful the woman. And none is more powerful than Caroline Astor—the Mrs. Astor.

But times are changing.

Alva Vanderbilt has recently married into one of America’s richest families. But what good is dizzying wealth when society refuses to acknowledge you? Alva, who knows what it is to have nothing, will do whatever it takes to have everything.

Sweeping three decades and based on true events, this is the mesmerizing story of two fascinating, complicated women going head to head, behaving badly, and discovering what’s truly at stake.” 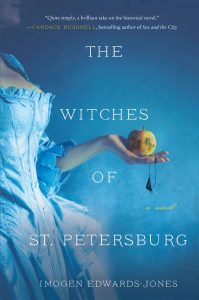 The Witches of St. Petersburg by Imogen Edwards-Jones
“As daughters of the impoverished King of Montenegro, Militza and Stana must fulfill their duty to their father and leave their beloved home for St. Petersburg to be married into senior positions in the Romanov court. For their new alliances to the Russian nobility will help secure the future of the sisters’ native country. Immediately, Militza and Stana feel like outcasts as the aristocracy shuns them for their provincial ways and for dabbling in the occult. Undeterred, the sisters become resolved to make their mark by falling in with the lonely, depressed Tsarina Alexandra, who—as an Anglo-German—is also an outsider and is not fully accepted by members of the court. After numerous failed attempts to precipitate the birth of a son and heir, the Tsarina is desperate and decides to place her faith in the sisters’ expertise with black magic.

Promising the Tsarina that they will be able to secure an heir for the Russian dynasty, Militza and Stana hold séances and experiment with rituals and spells. Gurus, clairvoyants, holy fools, and charlatans all try their luck. The closer they become to the Tsarina and the royal family, the more their status—and power—is elevated. But when the sisters invoke a spiritual shaman, who goes by the name of Rasputin, the die is cast. For they have not only irrevocably sealed their own fates—but also that of Russia itself.” 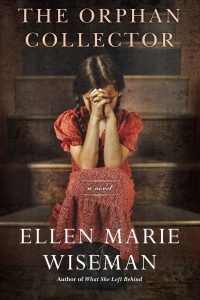 The Orphan Collector by Ellen Marie Wiseman
“In the fall of 1918, thirteen-year-old German immigrant Pia Lange longs to be far from Philadelphia’s overcrowded slums and the anti-immigrant sentiment that compelled her father to enlist in the U.S. Army. But as her city celebrates the end of war, an even more urgent threat arrives: the Spanish flu. Funeral crepe and quarantine signs appear on doors as victims drop dead in the streets and desperate survivors wear white masks to ward off illness. When food runs out in the cramped tenement she calls home, Pia must venture alone into the quarantined city in search of supplies, leaving her baby brothers behind.

Bernice Groves has become lost in grief and bitterness since her baby died from the Spanish flu. Watching Pia leave her brothers alone, Bernice makes a shocking, life-altering decision. It becomes her sinister mission to tear families apart when they’re at their most vulnerable, planning to transform the city’s orphans and immigrant children into what she feels are “true Americans.”

Waking in a makeshift hospital days after collapsing in the street, Pia is frantic to return home. Instead, she is taken to St. Vincent’s Orphan Asylum – the first step in a long and arduous journey. As Bernice plots to keep the truth hidden at any cost in the months and years that follow, Pia must confront her own shame and fear, risking everything to see justice – and love – triumph at last. Powerful, harrowing, and ultimately exultant, The Orphan Collector is a story of love, resilience, and the lengths we will go to protect those who need us most.” 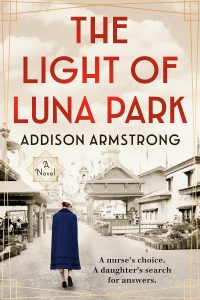 The Light of Luna Park by Addison Armstrong
“A nurse’s choice. A daughter’s search for answers.

New York City, 1926. Nurse Althea Anderson’s heart is near breaking when she witnesses another premature baby die at Bellevue Hospital. So when she reads an article detailing the amazing survival rates of babies treated in incubators in an exhibit at Luna Park, Coney Island, it feels like the miracle she has been searching for. But the doctors at Bellevue dismiss Althea and this unconventional medicine, forcing her to make a choice between a baby’s life and the doctors’ wishes that will change everything.

Twenty-five years later, Stella Wright is falling apart. Her mother has just passed, she quit a job she loves, and her marriage is struggling. Then she discovers a letter that brings into question everything she knew about her mother, and everything she knows about herself.

The Light of Luna Park is a tale of courage and an ode to the sacrificial love of mothers.”