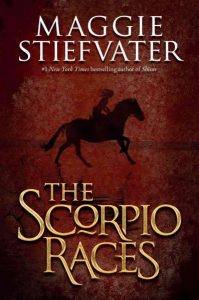 “It is the first day of November and so, today, someone will die.”

I reread this book every November. It has unforgettable characters and the descriptions of the fictional island of Thisby will draw vivid images in your mind. Based loosely on old myths and stories, the vicious, carnivorous horses climb out of the sea every October onto land, and they are caught and raced on the beach to win a big prize for the jockey–if you can resist their magic and the reach of their teeth.

But this is really the story of Sean, who has won the race four times on a horse he loves but doesn’t own. And it is the story of Puck/Kate, who lost her parents to the horses, but now is choosing to race to save her house and hopefully prevent her older brother from leaving the island.  Both have strong reasons to race and win and both don’t know yet the pull they will have on one another.

It is a little bit paranormal and a little bit fantasy and a lot about character and where you really belong.

In short, it is perfect.