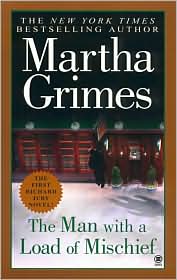 Martha Grimes’ mystery series has one thing I can’t resist: A charming, fallible detective. There are many other words that describe Chief Inspector Detective Richard Jury – personable, smart, unassuming – but those terms barely does him justice. Grimes excels at characterization; the inhabitants of the little villages Jury visits are fully realized, quirky, and entirely memorable.

And there’s one other thing that Grimes has mastered: Creating atmosphere. The cold and snowy drafts of winter, waves crashing against a seawall, a cozy pub – whatever Grimes puts her hand to on the page comes to life with delicious, almost tangible clarity. What’s more, that atmosphere always enhances the mystery, the sense of not-knowing, the danger.

If wonderful characters and strong atmosphere appeal to you, you may want to pick up the first of the Jury novels, The Man with a Load of Mischief.

In this first installment, Scotland Yard’s Inspector Richard Jury gets called to the small town of Long Piddleton, the scene of two inventive murders. Pitching the tight-knit community into a fit, Jury asserts that the killer may be one of them. But when the residents insist that both victims were strangers to their town, backing up his claim may prove to be harder than Jury thought.