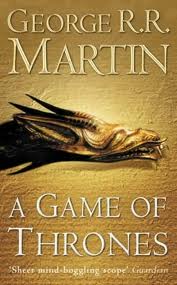 From The Boston Globe:

“Engrossing works of fiction inspire all manner of reader reactions. But hunger? That’s a surprisingly common takeaway for obsessed fans of George R.R. Martin’s best-selling series, “A Song of Ice and Fire,’’ the fifth book of which, “A Dance With Dragons,’’ hit shelves this summer after HBO’s adaptation of the first book, “Game of Thrones.’’

Millions of readers around the world have been devouring the epic fantasy phenomenon — some more literally than others.

Chelsea Monroe-Cassel and Sariann Lehrer, two women who met by chance when they became roommates in Allston last year, were so inspired by Martin’s descriptions of the food in his realm of knights, lords, dragons, and meat pies, they decided to create the dishes themselves. That includes pigeon pie, potted hare, even honeyed locusts.” 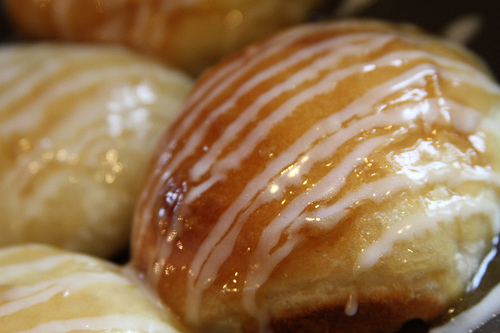 From her web site:

“I always wanted to be that author. The one that torments loads of readers by inventing food so delicious they can’t resist it . . . and then laughing meanly when they realize it’s not real.

And I had the perfect opening in THE SCORPIO RACES. It’s set on a tiny, remote island with not much to do and the yearly Scorpio Races are a big deal, so to kick it all off they have a folk festival involving bonfires, superstitions, and beer. This, I thought, would be a great place to insert a fake seasonal food. At first, all I had was the name: November Cakes. Even I wasn’t quite sure how these things would bake up until the main character’s brother showed them to us:

Finn finds my left hand, opens my fingers, and puts a November cake in my palm. It oozes honey and butter, rivulets of the creamy frosting joining the honey in the pit of my hand. It begs to be licked.

There was only one problem. Something about this book demanded that I put my hands on everything in it I possibly could. I had to do an incredible amount of hands-on research for it, because I just couldn’t stand to wing anything. And this exact same principle meant that I found myself in the kitchen spending hours trying to make November Cakes.”

If the tease above – honey! creamy frosting! – has left you wanting to try these cakes, pronto, well…You can! 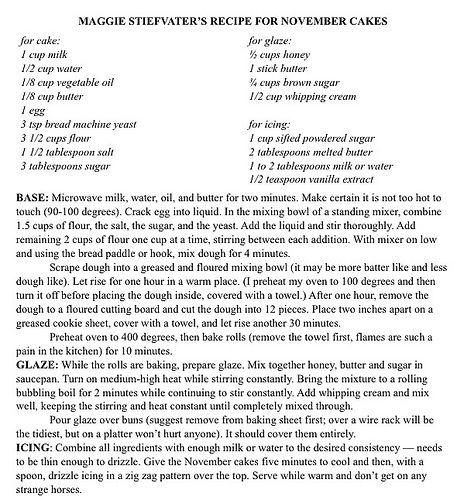 Have you thought about recreating a menu or food item that you read about in a book? Share in the comments.