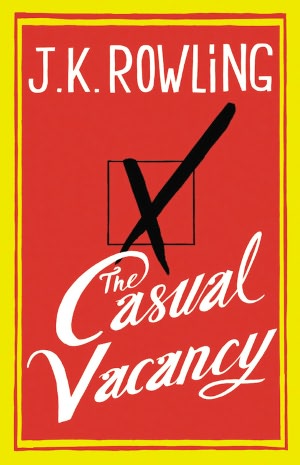 When Barrry Fairweather dies unexpectedly in his early forties while on his way to a lovely night out with his wife Mary, everyone in tiny town of Pagford is shocked. To the casual observer Pagford is your typical idyllic quaint English village with it’s cobbled market square and medieval abbey. But underneath this facade is a town at war. There are the rich at war with the poor, teenagers at war with their parents, wives at war with their husbands, teachers at war with students, and so on. The empty town council seat left by Barry’s untimely death will prove to be the catalyst for the biggest battle Pagford has ever seen and one that unravels the fragile threads that has held the town together.

Okay. I’m going to get the bad stuff out of the way first. For those of you who are unaware, this book is as far away from Rowling’s Harry Potter series as you can get. This book is basically a full frontal assault on the complacency, selfishness, narrow-mindedness, and sheer meaness of the inhabitants of Pagford. While I usually have no problem with this, the charcters as a whole were completely one dimensional. The only likeable adult was the dead man, Barry Fairweather. The teens faired marginally better. While most of them were just as mean and nasty as their parents, there were sympathetic aspects to them. There’s also a lot of bad language and sexual content. Once again I normally have no issue with this except Jo uses so much of both in this book it can be a bit distracting. Finally the book ends with a tragedy which unfortunately no one seems to learn from.

Now for the more positive things. Despite the direness of the plot and the characters, Jo’s sly humor peeks out occasionally and helps makes the book be more palatable. After seven books following children growing into young adults this shows in The Casual Vacancy. As I said previously, most of the teens are as nasty as the adults, but there are reasons and they do have redeeming qualities. The plot itself is interesting and moves along pretty quickly. While the village of Pagford and the events that unfold are set in England, you could easily translate them into any small town here. To sum things up, I am not sorry to have read this. I think the main problem with this book is that Jo tried a little too hard to prove that she could write more than children’s fantasy books. If I were rating it I would probably give it 3 stars. I would recommend this to people who like their books on the dark side and filled with politics and social commentary. I look forward to reading Jo’s next book.