Lumberjanes, vol. 1: Beware the Kitten Holy by Noelle Stevenson and Grace Ellis
“Friendship to the max! At Miss Quinzella Thiskwin Penniquiqul Thistle Crumpet’s camp for hardcore lady-types, things are not what they seem. Three-eyed foxes. Secret caves. Anagrams. Luckily, Jo, April, Mal, Molly and Ripley are five rad, butt-kicking best pals determined to have an awesome summer together–and they’re not gonna let a magical quest or an array of supernatural critters get in their way!”

Ms. Marvel, vol. 1: No Normal, vol. 2: Generation Why, and vol. 3, Crushed by G. Willow Wilson and Mark Waid
“Kamala Khan is an ordinary girl from Jersey City – until she’s suddenly empowered with extraordinary gifts. But who truly is the new Ms. Marvel? Teenager? Muslim? Inhuman? Find out as she takes the Marvel Universe by storm!”

For me, reading graphic novels acts as both a palate cleanser and a productivity boost: something to reinvigorate a reading slump after a couple of disappointing choices (I’m looking at you, Modern Romance) and allow me to finish a self-contained work in an afternoon (gotta pump up those Goodreads counts, y’all). What I did not plan, however, was falling completely in love with both Lumberjanes and the new iteration of Ms. Marvel. Thinking I would just casually flip through my copies of Beware the Kitten Holy and No Normal and then scurry off to something else was a rookie mistake. After reading the last panel of Lumberjanes, vol. 1, I slowly savored each page of extra content, unwilling to close the flap and declare the journey over. What were Jo, April, Mal, Molly,and Ripley up to and how soon would their adventures arrive in the next trade edition? I was able to satisfy my thirst for more “hard-core lady-types” with Kamala Khan, but diving into her world only allowed a binge session of No Normal, Generation Why, and then Crushed…followed by the inevitable position of being caught up with a finite number of issues. (Like bingeing on Netflix only to be faced with one new episode weeks apart. PURE. AGONY.) 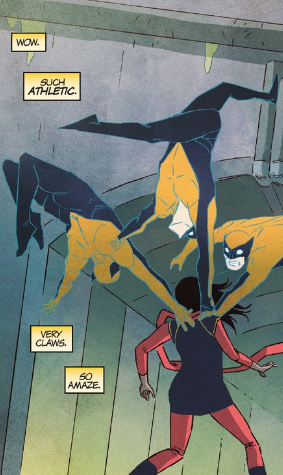 Both Lumberjanes and Ms. Marvel are quick studies in supernatural and speculative fiction (respectively), showcasing kick ass females, body positivity, and self-reliance. Kamala might wear a dress and be an über fangirl toward Wolverine (he exists irl okay, and it is awesome), but she still knows how to throw an epic punch and battle a robot Thomas Edison – ’cause exhibiting stereotypical feminine characteristics does not mean a person is weak, thank you very much, and G. Willow Wilson makes sure we know that just as much as Kamala does. Then there’s the graphic novel equivalent of actual female bodies peppered throughout Lumberjanes – tattooed and soft and short and tall and leggy and masculine – paired with an “everybody is strong in their own way” message that never feels forced or heavy handed. Even if I can’t be any of these girls, I want to at least know them and soak up their self-esteem and feminism. (Because any good reader knows that a journey of self-empowerment does not end in the pages of the book.) 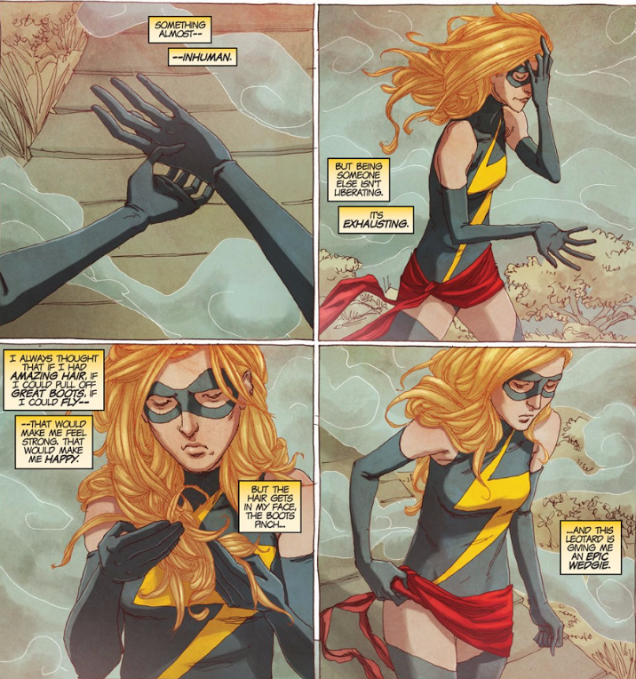 There’s a reason each paperback is aimed at teens and tweens – hello high school politics and post-puberty body shame – but there’s also no good reason why the totally rad (yet sadly fictional) exploits of five teenagers or Kamala’s journey of self-discovery can’t also apply to twenty- and thirty-somethings grasping at their own self-identity. Being kind to yourself and celebratory of your own strengths is hard, y’all, but the hardcore ladies of Lumberjanes get it. And so, too, does Kamala: developing the ability to be her own hero, Captain Marvel, comes with its own disappointments, and Kamala soon figures out that she’s physically stronger when she doesn’t change, and that instead of feeling liberated by the blonde hair and legs, the whole thing leaves her feeling exhausted. It’s a major plot point, but, hell, it’s also great life advice. (You go, girl.)

And, even when Stevenson and Wilson tackle afternoon special-style “real issues,” we’re never taken out of the story to question just what the junk is going on. Crushed features analogies to victim blaming, but we’re right there with Kamala, grimacing at how squicky the whole thing feels. Wilson isn’t preaching to us about why it’s terrible that victim blaming is still a thing. (BECAUSE WHY IS IT EVEN STILL A THING?!) We’re angry at Kamran for taking advantage of Kamala. We’re angry that he’s actually kind of a dick and not the heart emoji type of Muslim boyfriend Kamala swore she wouldn’t date. We’re angry for Kamala and at Kamran. (Just as it should be.)

These graphic novels tackle current issues with grace and over-dramatic Tumblr-worthy flair, and they’re funny and poignant and I NEED MORE, OKAY?!