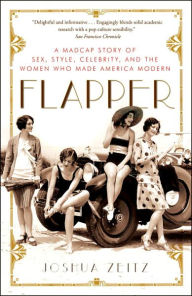 Who invented the flapper? Was it one of the equally infamous Fitzgerald’s? F. Scott so often gets the credit, whereas Zelda had her fingers on the pulse of what it was to be a flapper more intimately than her husband ever could. But, all right, if not one of the expat members of the Lost Generation, who else might we pin the Creator label on? The silent film actress triumvirate of Colleen Moore, Clara Bow, and Louise Brooks? Or one of those Madison Avenue admen? Joshua Zeitz shimmies his way around an answer, while painting a panoramic picture of 1920’s American culture, with a specific focus, as the subtitle suggests, on the women who embraced or embodied the role of the New Woman, in other words: the flapper.

A recent, renewed interest in the Lost Generation (sparked by another book, Dear Scott, Dearest Zelda: The Love Letters of F. Scott Fitzgerald and Zelda Fitzgerald) led to the discovery of Zeitz’s Flapper: A Madcap Story of Sex, Style, Celebrity, and the Women Who Made America Modern. My initial curiosity was twofold. The Fitzgerald’s allure, whether it be fact or fiction-fueled, is one good splash in a European fountain away from being as pervasive today as it was in their own time (see for examples: Midnight in Paris; Therese Anne Fowler’s novel, Z), but no two books (be it a biography or microhistory) presents the same view of their legendary relationship. In light of their widely reported antics, I find the disparity fascinating, and as a result am regularly on the lookout for yet another angle. Or perhaps one that acts as another’s corroborating witness. The Fitzgerald’s and how they, as individuals and as a couple, informed an era was one point of interest. The remainder of my curiosity was wrapped up in the book’s gendered focus, and what, based on the publisher’s copy, I assumed was to be a time period viewed through a decidedly feminine lens.

Thanks in no small part to relevant comparisons with previous decades, Zeitz effectively conveys just how great a cultural upheaval America experienced throughout the 20’s. Think about how much power a raised hemline held over society as the lingering Victorians knew it–It’s remarkable. (Even more remarkable for me, personally, was how strong the urge became to time travel back to the mid-20’s, track down one of those Madison Avenue admen, and give him the dressing-down of his life for pioneering the insidious trend in marketing that to this day is designed to prey on the insecurities of young women and men, thereby creating a culture of perpetual self-loathing and feelings of never-good-enough.) Zeitz unwinds a highlight reel of events and the people responsible for shaping the country during that stretch of ten years, and shows how women were, more and more, demanding things (like cigarettes, gin, a Chanel dress (or knock-off, if they couldn’t afford the real thing); a job to pay for the latest issue of Photoplay or tickets to see the new Valentino or Fairbanks film; and while they were at it, the right to be treated by one and all as fairly as the man standing next to them was by default. Basically: take all those double standards somewhere else, perhaps with an anchor to the very bottom of the Hudson).

Bobbed hair and a certain style of clothing was a sliver of what it meant to be a flapper. The image might be iconic, but flappers were really pursuing a lifestyle built on the desire to fully experience the world, to indulge in all kinds of living and loving, not just make do with the scraps society pointed to as being good and acceptable for women. Zeitz includes all manner of opinions on that pursuit, including the thoughts of feminists who came before and after the flapper. He also narratively ticks off a list of the many ways in which the flapper image was manipulated, exploited or exaggerated, so often by men wanting to make a buck, and that extending out from the Sheiks in the offices of any one of the growing number of ad agencies to the tango pirates of the dance halls and speakeasies.

It’s fair to say I got a good deal more than I bargained for from Flapper, and you better believe I will soon be revisiting the 1920’s, perhaps in one of the books below, each one an in-depth look at a powerhouse woman spotlighted in Flapper.