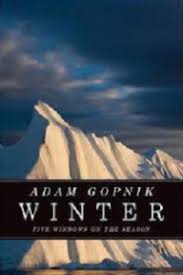 The Massey Lectures is an annual series of lectures delivered by Canadian writers, scholars, and thinkers, that take form around a central idea or theme. In 2011, Adam Gopnik chose as his theme the winter season. His lecture (Winter: Five Windows on the Season), structured in five-parts, focuses on ideas, events, and activities typically associated with the give-or-take span of time between December and March. His polymathic view on the season sweeps across art and literature, history and science, and in the final chapter, with an eye informed by present-day technology and theory, shifts towards the future.

The parts, in brief:

Romantic Winter was my favorite chapter and the one I found most engaging. Focused as it is on the work birthed by the Romantic movement, this section makes repeated mention of how, from a safe distance, artists and writers of the time made cathedrals out of snow formations, ships out of icebergs. How the then-notion of snowflakes being unique and individual (and a representation of the soul) has been shifted by science to the knowledge that snowflakes originate in a similar form and change as they fall. In this chapter, Gopnik turns us toward the moody work of German painter Caspar David Fredrich; urges us into the fur-filled sleighs that glide through the stories of Russian writer Alexander Pushkin; leads us into the realm of Hans Christian Andersen’s Snow Queen; and ushers us off to Switzerland, to the Alps, where people who had perhaps viewed Turner’s painted portrayal of the mountains, or read Ruskin’s review of the area, went to witness winter’s crowning glories while being kept safe from its threats in any one of the region’s ski auberges.

This chapter also introduced me to Anna Brownwell Jameson, who Gopnik credits with having “a first-rate mind,” and whose marriage in 1836 led to a move from England to Toronto. Once installed in Canada, an avid diarist, she records some of her experiences with the winter season, including a trip to Niagara Falls. Unfortunately, due to the timing of her visit, “All the associations which in imagination I had gathered round the scene, its appalling terrors, its soul-subduing beauty, power and height, and velocity and immensity, were all diminished in effect, or wholly lost.” Her published diaries are now on my to be read list.

Radical Winter also greatly appealed to me. I have long harbored my own fascination with the “heroic age” of arctic exploration, and have consumed a number of books on the subject, but this chapter, if memory serves, marked the first time I had encountered a mention of Sir Robert Scott’s connection to Peter Pan’s creator J.M. Barrie. One of Scott’s last letters was apparently to Barrie, and in the aftermath of Scott’s second ill-fated expedition Barrie was one of the writers engaged in the “myth-making” that turned Scott and other explorers into the heroic legends they’re still seen as today.

But even if what I’ve noted as of-interest to me does nothing for you at all, there’s the chapter dedicated to winter sports, and a tour of Montreal’s underground city in the last chapter. While the book is a cohesive whole, there’s no reason its parts couldn’t be read out of order, or some of them skipped entirely.