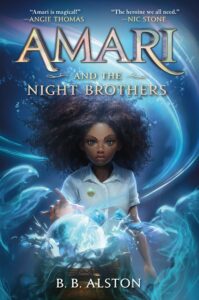 Amari Peters would do anything to find her missing brother, Quinton. When a classmate at the prep school she attends on scholarship suggests involvement with a gang likely got him killed, Amari comes strongly to his defense. Her responsible and brilliant older brother, Amari knows, would never join a gang. When that same classmate’s mother uses the incident to force the principal to rescind Amari’s scholarship, she decides to use the extra time to redouble her efforts and prove her brother is alive. It helps that she finally has a place to start: The briefcase she just mysteriously received containing a nomination for a tryout at the Bureau for Supernatural Affairs, the agency her brother worked for when he went missing.

The Bureau’s mission is to keep the supernatural world separate from the world Amari has always known. To protect the citizens inhabiting both. They do so with supernaturally boosted talents—astonishing levels of intelligence, unlikely strength, excessively good luck. Amari’s talent? She’s a magician. And that particular talent? It’s illegal. If Amari is going to discover the Bureau’s secrets, if she’s going to find her brother, she knows that aside from ogres and aliens, she’ll have to face the judgement and prejudice of those who fear and hate her because of her skin color or for being born a magician—things Amari has no control over. But sometimes, tired of the unfairness of it all, she wonders: Is she up to the challenge?

While she may stumble every now and then, make mistakes she’s convinced her brother never would have, Amari is up to that challenge. And for this reader, at least, witnessing Amari’s confidence and conviction grow and strengthen, watching her realize her own self-worth and acknowledge her own qualities, was one of the most outstanding aspects of the story.

In terms of the Bureau and its mission (and their willingness to wipe or warp memories when necessary), it’s perhaps too easy to draw comparisons to Men in Black. There were certainly instances on the page that prompted me to think the author must have had a lot of fun creating the supernatural world Amari suddenly encounters. And like that film franchise, Amari and the Night Brothers is packed with action, secrets to unravel, and in the grand scheme, what’s at risk if not the fate of the world.

Fans of character-driven fantasy that confronts persistent and pervasive real-world problems alongside magical ones should check out this book ASAP.

Amari and the Night Brothers is also available as an ebook and on eaudio.