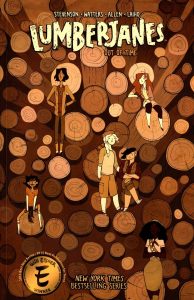 I was really not a fan of Lumberjanes, Vol. 3: A Terrible Plan, but volume four, Out of Time, gave me the same warm and fuzzy feelings as the series opener, Beware the Kitten Holy. Was it because Brooke Allen was back illustrating my favorite five-some after one issue off? Or because the story felt like it actually went somewhere after the stalled plot of A Terrible Plan? First, readers were not only introduced to a new character (Abigail), but they were also given details to make her a fully-formed player in the ongoing Lumberjanes saga. Second, Stevenson and Watters actually gave camp director Rosie something to do (and say) instead of just drawing her into a handful of panels and having her hover just out of frame (and mind). Third, the overarching themes and plot points that have been lurking in previous Lumberjane issues were teased into an all-encompassing universe. What is happening at this summer camp and potentially why those things are happening finally make just a bit more sense. Hopefully, volume five, Band Together, will continue the trend.