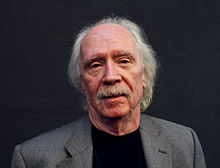 John Carpenter is an American filmmaker well known for his cult films. In the United States he is often derided as a horror director, or in his own words “A bum”, but overseas his cinematography is celebrated. While a significant amount of his work is rooted in the horror genre, they are often quite complex. Carpenter has a reputation for being able to produce a marketable film on a minimal budget. Despite his share of box office flops, many of these movies have become cult classics, such as Big Trouble in Little China. Several of his early movies have been subject to re-makes, with more in the pipeline. Compared to the originals these re-makes have not been well received. Despite their larger budgets, these films lack Carpenter’s unique touch. It is perhaps his insistence to have full creative control of the movie. While this has not endeared him to studio heads, it does create a consistency rarely found in contemporary films. Many of these movies suffer from “too many cooks in the kitchen”, with various re-writes and cuts on the part of the director, producer, and studio. With the final cut often up to executives, it is not unknown for talented directors to sever relations with the studio.

Collin Odell has written an excellent e-book biography of John Carpenter, which is available to Danvers residents through ebrary.com. Non-residents can access this e-book on the many public computers available the Peabody Institute of Danvers, or through our public wifi.

Twenty three years before Pirates of the Caribbean: Curse of the Black Pearl, comes a story of pirates, treasure, and revenge beyond the grave. In the midst of their 100th year anniversary the coastal town of Antonio Bay is under siege by a thick and menacing fog. Strange figures can be seen moving in the obscuring mist, those caught in its wake are hacked to pieces. One hundred years prior the grandfather of Father Malone conspired with five other men to sink and pillage the Elizabeth Dane, a clipper ship owned by Captain Blake. The money and goods from the ship were used to build the town and church. Blake and his men have returned to avenge themselves, killing six townsfolk, symbolizing the six conspirators. This movie was subject to a remake in 2005 with a budget far exceeding the original, but with a gross not much more than the 1980 film.

Both versions of The Fog are available through interlibrary loan.

John Carpenter’s The Thing is one of three movies inspired by John W. Campbell’s 1938 novella Who Goes There? The first film based on this science fiction tale of isolation and paranoia was The Thing From Another World, released in 1951. The Carpenter version came out in 1982, and a prequel in 2011. The three movies roughly follow the basic plot in Campbell’s novella. The crew of an Antarctic research station comes across a mysterious creature frozen in the ice. They take it back for study, only to have the creature escape and begin to consume and impersonate the crew. No one is sure of who is still human, creating a menacing atmosphere. The 1982 film finishes on a grim note, the station destroyed with the last two survivors slowly freezing to death, each uncertain whether the other is the creature in disguise. An alternate cut was filmed to give the movie a happy ending, but Carpenter chose to keep the bleaker version. Of the various film adaptations the 1982 iteration is the most faithful to the original source material. Like The Fog, the Carpenter version was better received. Both films were box office flops; however the 2005 prequel lost more money.

Both the 1982 and 2011 versions of The Thing, as well as The Thing From Another World are available through interlibrary loan.

One of several Carpenter cult films starring Kurt Russel, Big Trouble in Little China is a guilty pleasure of mine. Russel takes the lead as Jack Burton, a brash trucker thrown into a battle between secret societies, and a centuries old Chinese sorcerer. The film does not have the same depth as some of his other works, and is more of a popcorn flick. Big Trouble in Little China combines comedy, horror, and martial arts. Like other films from the 1980’s Big Trouble in Little China is very quotable. While the movie was a box office flop, losing the studio almost ten million in the process, it has gone on to become a cult classic. In his biopic of Carpenter, Colin Odell speculates that the film was too ahead of its time. The blend of Eastern fantasy, and Western adventure did not captivate moviegoers at the time (Odell 74).

The blue ray edition of Big Trouble in Little China is available through interlibrary loan.

While They Live is primarily known for over the top action, and cheesy dialogue, the film is quite deep. Roddy Piper plays Nada, a down on his luck construction worker. Nada has traveled to Los Angeles seeking employment in a bad economy. He is befriended by a coworker, Frank who is played by Keith David. Frank takes him to a local church that is functioning as both a soup kitchen, and headquarters to a resistance group. Through a series of strange events, and a pair of special sunglasses, Nada discovers Earth has been subjugated by an alien race. These extraterrestrial colonizers are able to move in the open through a special transmitter that disguises their true form. In addition the transmitter allows them to control the population through subliminal messages. With Nada’s special sunglasses billboards, newspapers, and television shows are being used to keep humanity asleep. The creatures are aided by a small army of human collaborators, who operate at the governmental, corporate, and media level. After shooting up a bank and uttering the famous line: “I am here to chew bubblegum and kick ass and, and I am all out of bubblegum”, Nada takes a hostage, who turns out to be an assistant director for a local news station. Holly played by Meg Foster, agrees to help Frank and Nada take out the transmitter. She to turns out to be collaborator, and kills Frank right before they reach the roof. Nada is able to fend off Holly, and take out the transmitter, just before being mortally wounded. The films conclusion cuts through a series of scenes revealing an awake and shocked humanity.

Like H.G. Well’s War of the Worlds, They Live is giving viewers an inkling of what it is like to live under colonial rule. At the time it was released They Live was tapping into fears regarding the corporate and commercial culture of the 1980’s. The film is just as relevant today with the United States is embroiled with new social movements pointing out disparity in income, collusion of media with corporate interests, mass shootings, and oppression of the disenfranchised. “Eight O’Clock in the Morning” can be found in the Young Oxford Book of Aliens.

In the Mouth of Madness is the final film of Carpenter’s “Apocalypse Trilogy”, the previous being The Thing, and Prince of Darkness. In the Mouth of Madness draws inspiration from the works of Robert W. Chambers, H.P. Lovecraft, and Stephen King. References to their bodies of work are scattered throughout the film. The title is almost certainly a play on Lovecraft’s 1936 novella At the Mountains of Madness. With the fictional author Sutter Cane and the town of Hobb’s modeled on both Lovecraft and King. While the infecting madness that permeates Cane’s books is clearly inspired by Chamber’s collection of short stories entitled The King in Yellow. It is rather unfortunate that many adaptations of Lovecraft’s work fall short. While In the Mouth of Madness is not based on a particular story, the film does evoke the intellectual horror Lovecraft sought to create.

Sam Neil plays John Trent, an insurance investigator attempting to find world renowned horror author Sutter Cane. His publisher is frantic, as the manuscript for his most recent book has disappeared along with the writer. Trent is a skeptic from the start, seeing the whole thing as a publicity stunt. Even after being attacked by Cane’s former agent, he continues to disbelieve. Trent is paired up with Linda Styles, Cane’s editor who is portrayed by Julie Carmen. The two discover that the slipcovers of Cane’s books form a map to Hobb’s End, a town featured in many of his stories. Upon arrival, they find that time, and reality is fluid within the town. After being repeatedly terrorized by its inhabitants, Trent and Styles encounter Sutter Cane. He reveals that they, like the town are products of his fiction. His books are being used as a gateway for terrible alien demi-gods known as the Old Ones. Cane’s power is linked to the proliferation of the books, he reveals that Trent was written to come to him, and deliver the manuscript to the outside world. Trent continues to resist, only finding that he had handed it in. Even worse the book is being produced as a big budget film ensuring its spread to non-readers as well. The movie ends with Trent in a padded cell, the sound of carnage and inhuman roars all around him. The noises cease, and Trent finds a ravaged world empty of human life. He comes across a theater playing In the Mouth of Madness. Settling down Trent laughs manically at his onscreen antics.

The film questions the very nature of reality, and whether free will exists. While Trent continues to struggle against Cane, Linda Styles abandons any pretense of resistance. She had read the manuscript, and knew that her actions were not only plotted out, but how the story will end. It is for the same reason that Trent is seized by madness at the end, cackling at his attempts to thwart a pre-determined fate.