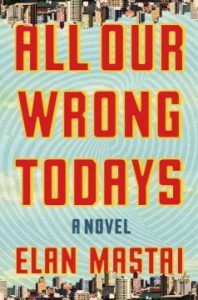 All Our Wrong Todays by Elan Mastai
All Our Wrong Todays is one of the few books where the actual story lived up to the book’s hype and summary. (Mastai’s ability to form letters into words into sentences doesn’t hurt, either.) We follow our bumbling protagonist Tom Barren – through his mother’s death, a string of one-night stands, and an omnipresent patriarchal disappointment – into a split second decision to time travel to the moment his society’s technological know-how accelerated in 1965 – and he fracks it up. (Because of course he does.) And so Tom gets teleported (transferred?) into the Tom Barren who lives in our 2016. Trippy sci-fi time travel hijinks ensue.
Although the romantic B-plot underwriting the entire story became a little too pronounced by the book’s end, I still inhaled this. (Because time travel!!!) 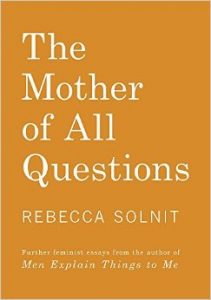 The Mother of All Questions by Rebecca Solnit (out March 7th)
Comprised of essays from the last two years, Solnit’s latest is a continuation of the feminist issues to which she gave voice in Men Explain Things to Me, grouped together under two headings: “After Silence” and “Breaking the Story.” The Mother of All Questions is slim at 160 pages, but Solnit’s observations make you pay attention to each word or phrase. Don’t go into this thinking it will be a nice, short read. (Because when is the examination of ingrained sexual and gendered behavior ever “nice and short”?) Savor each sentence and anecdote. Write in the margins. Underline. Take notes. Hope that in three more years, maybe we won’t need Solnit to again write so insightfully about feminism. 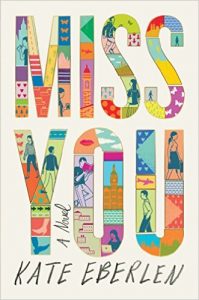 Miss You by Kate Eberlen (out April 4th)
The title of Miss You should instead be Just Missed You, as Tess and Gus’s story is hinged upon their lives touching for a moment and then spinning wildly away again with the force of contact. I stayed up late reading, buoyed by the hope that maybe this day, this moment, would mean Gus and Tess would finally become more than just tertiary strangers in each other’s lives. And then when it didn’t, when that moment took almost twenty years, I was so happy I cried.