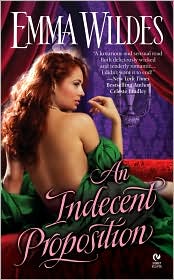 It’s the talk of the town. London’s two most notorious rakes have placed a very public wager on which of them is the greatest lover. But what woman of beauty, intelligence, and discernment would consent to judge such a contest? Lady Carolyn Wynn is the last woman anyone would expect to step forward. But if the men keep her identity a secret, she’ll decide who has the most finesse between the sheets.

To everyone’s surprise, however, what begins as an immoral proposition turns into a shocking lesson in everlasting love…

Admittedly, it’s been a while since I’ve read an historical romance novel. So what made me pick this one up? Well…Publisher’s Weekly gave it a starred review and chose it as a Pick of the Week. The P.W. review of the novel went so far as to say that Wildes “provides a spectacular and skillfully handled story that stands head and shoulders above the average historical romance.”

And you know what? I quite enjoyed the time I spent in the company of the Devilish Duke of Rothay, Nicholas Manning.

In An Indecent Proposition you’re actually getting two love stories; I found one more engaging than the other, but only slightly, and the characters’ varying chapters fueled the quick pace of the novel. The wager was a nice premise, but what it helped reveal – an abusive marriage, a young heartbreak, and the pain of letting love go – made the story more than the sum of its parts.