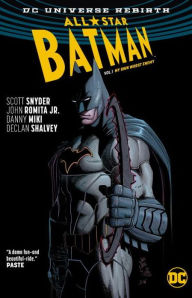 As an avid reader of DC Universe comic books and the wide array of heroes that they cover, I had high hopes for All Star Batman Volume 1: My Own Worst Enemy by Scott Snyder. Batman, being one of DC’s most popular heroes, has multiple storylines in the current ‘Rebirth’ comic run, but the All Star Batman series has promise to be one of the more gruesome and violent of them all, giving some of the older Batman fans something to enjoy. There is no doubt, when one turns the first few pages of this book that we have come a long way from the cheesy Adam West Batman of the 1960’s. No longer is Batman accompanied by faithful sidekick, Robin, but is instead paired with a relative newcomer to the comic scene. Duke Thomas is a far cry from the pixie-booted, green-tights-wearing Dick Grayson, but he is no less suited to the role of being by Batman’s side.

Though Duke has a role within this comic, Batman is undoubtedly the star alongside Harvey Dent, more infamously known as Two-Face. The pair is on a cross country trip in search of an antidote to heal Harvey of his scarred face, and possibly his villainous side as well. However as with any Batman comic, one must prepare for the main characters to face turmoil at every twist and turn because while Harvey might desire a life free of Two-Face, his criminal side is determined to make sure that plan fails. As Batman fights off the slew of talented assassins seeking the bounty that Two-Face placed on his head, the reader is treated to witty banter and interesting plot written by Scott Snyder, accompanied by talented illustrations created by John Romita Jr., Danny Miki, and Declan Shalvey.

If this volume is anything to go on, the rest of Snyder’s run with Batman should be an interesting and violent ride through Gotham.