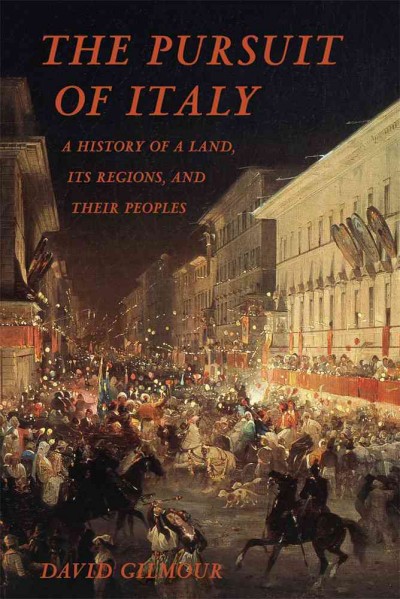 Did you know that there is a debate going on as to whether Italy should exist? We take the nation state of Italy for grated but not so long ago it didn’t exist. Prior to the formation of the Kingdom of Italy in 1860 the very concept of “Italy” was in a constant state of flux. Gilmour’s The Pursuit of Italy explores the ever shifting idea of Italianess through history, geography and language.

I will be the first to admit that my knowledge of Italy after the Renaissance and before World War II is pretty hazy. I was vaguely aware that in the 19th century the various states of the Italian peninsula were combined into a Kingdom under the royal family of Savoy. The hows and wherefores of that process were a mystery to me. Which is why I picked up this book but it turned out to be much more that just a history of 19th and 20th century Italian history.

Gilmour opens by demonstrating just how deserve the people living in Italy are. Starting with the geography of the peninsula which seems designed to keep people from coming together. Rocky coastlines, many non-navigable rivers and a mountain range slicing the peninsula down the middle. Have done an excellent job of preserving regional differences while at the same time not keeping out invaders.

From there moving to the languages of Italy. What we think of as standard Italian is essentially just the dialect of Tuscan Italy raised to the level of a standard language. However for centuries and in some cases even today local dialects that are part of the Italic language group, but are not necessarily mutually intelligible, are spoke throughout the country. So for example if you put a person who speaks Venetian in a room with a person who speaks Sicilian they would probably have a hard time understanding each other.

Then there is the history. As mentioned above the geography didn’t do much to keep invaders out of Italy. Even when the Roman empire dominated the whole peninsula, the place was still a conglomeration of Greeks, Dalmatians, Albanians, Gauls, Italic tribes, Germanic tribes as well as invaders from Africa. And it basically stays like that for centuries only the invaders change to Normans, Muslims, French, Germans and Byzantines.

So knowing that why is there an Italy at all? That is where Gilmour gets into the history of Italy in the 19th and 20th century and how people reacting to their past both real and imagined forced the creation of a state that had never really existed before.

This is a great book for anyone just generally interested in history. It is not academic in anyway so its very accessible and is loaded with information.