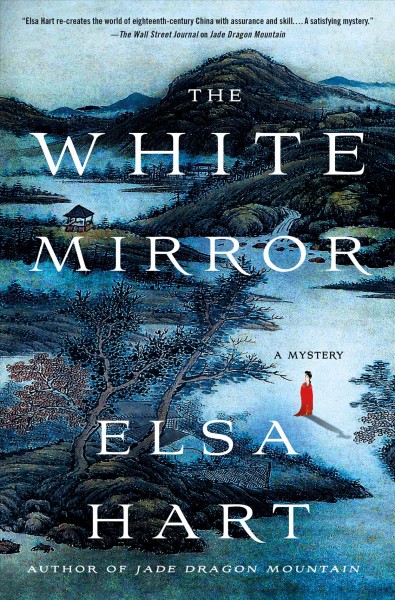 Do you ever have those times where you really love a book and you think “oh I can’t wait until the next one comes out!” Then life moves on and suddenly you look back and not only have you missed the next one but you missed the next one after that. That’s what happened to me. I loved Elsa Hart’s Jade Dragon Mountain. Then while I wasn’t paying attention she came out with White Mirror and is about to release City of Ink (August 21). So I grabbed the first copy of White Mirror so I could catch up before City of Ink is released.

As with Jade Dragon Mountain the story is a mystery and follows the travels of Li Du the exiled Imperial librarian from Beijing. White Mirror takes up a few months after Jade Dragon Mountain. Li Du has joined a caravan heading for Lhasa in Tibet. Caught by a snow storm in the mountains, Li Du’s caravan shelters at the estate of a local lord. On the way they encounter a dead monk on a bridge with a knife plunged in his stomach. Li Du is left to unravel a complex series of mysteries involving the murdered man, a Capuchin monk scared out of his skin by something, an angry Lama and that’s just the beginning. At the same time Li Du is dealing with his own painful memories of he and his teacher’s down fall as well as confronting the ever encroaching world of Europe on China.

White Mirror is as much about the place as it is about the mystery. In fact I could take or leave the mystery but the setting grabbed me and wouldn’t let me go. Hart goes into great detail to capture the time and the place. All the different ethnic groups and languages along the many roads heading east and west. The landscape itself are all rendered like one of the paintings that feature in the story. Mountain landscapes, fortified mansions, hot springs all of it I could drink up. The whole story made me want to jet off to Tibet or at least (and more likely) have supper and a Tibetan restaurant