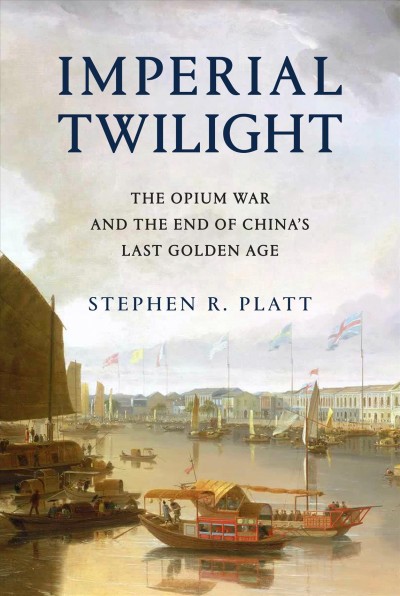 In tandem with my reading of White Mirror, I’ve also been listening to Imperial Twilight. I was vaguely aware that there was an Opium War and that it basically amounted to the British declaring war on China to force them to buy drugs from their colony in India. And that is basically what happened but it was way more complicated than that. Imperial Twilight takes you inside the political, mercantile and social machinations of English relations with China from its first English trading expeditions in the 17th century up to the end of the Opium War in 1842.

Only the last third of the book actually deals with the Opium War but that’s ok because everything that comes before is fascinating unto itself. Most of England’s interactions with China can be characterized as ham fisted. From the first successful attempt to go to Canton by Captain Weddell in the 1630s which involved fighting his way up the Pearl river and having the Chinese essentially pay him to go away to the rather manic/haphazard efforts by the British government to curtail opium smuggling in the 19th century, England comes across as clueless at best. The Chinese come across as both trying to take advantage of trade while at the same time sensing the threat the English represent and trying to keep their distance.

It would be very easy for a book like this to get lost in the weeds of both economics (silver exports verses opium imports) and politics (China sees trade with England as a form of tribute whereas England sees themselves as equal partners with China) of this era. Platt manages to navigate this by tying his narrative closely to individuals. The book is filled with the lives of Brisher merchants, missionaries and interpreters as well as Chinese merchants, pirates and government officials. He also does an excellent job of placing the English relationship with China in the context of political developments in China itself.

Platt also does a good job of dispelling myths about the Chinese. It is often said that the Chinese were inward looking and had no desire for English goods. This isn’t true since before opium, cotton cloth from India was a major import into China. There was also a demand for western goods as a sign of statues. The concept of a China that wasn’t interested in western goods is a result of a too literal reading of Chinese government documents. Also the fact that Indian cotton cloth was so popular dispels the myth that opium was the only trade good the Chinese were interested in.

I also love all the nitty gritty details that he gives about how you smuggle opium into China in the early 1800s. The short version of this highly complicated process was: independent traders, licensed by the British East India Company, buy the opium from the Company in India. They then sail to China but rather than take it to the trading center at Canton, they house it on what amount to floating warehouse ships in the outer Pearl River estuary out of reach of the Chinese authorities. The traders then go to Canton where they make their deals with the Chinese drug dealers who send fast heavily armed boats out to the warehouse ships to take the cargo into China. The traders, who are paid in silver, then go the East India Company factory in Canton where they exchange their silver for letters of exchange which they can turn in for English pounds or more opium in India. The Company then takes the silver they got and uses it to buy tea from the Chinese.