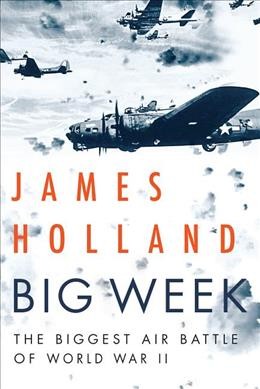 When I was in high school I was an absolute World War II aircraft nut. I could identify all the planes. I knew all their specifications. I knew the exact course of the air war in Europe and the Pacific. It got so obsessive that my teachers worried that I wasn’t reading anything else. Then time marches on and I drifted into other historical interests and really never looked back at the World War II air war. That is until now. I picked up Big Week as much to see if I still found the subject interesting and although I may not be as obsessed with it as I used to be I can say Big Week is a great book for reading about the air war in Europe.

The title of the book, Big Week is the name that flight crews gave a series of missions involving fighters and bombers of both the British and American air forces to try and eliminate the Luftwaffe in the lead up to the D-Day invasion. The title though doesn’t really do the book justice because its actually about the air war in Europe from the start of World War II up through 1944. It covers all the aspects: British and American Fighter Commands, British and American Bomber Commands and German Bomber and Fighter Commands. In fact it takes until Part 3 to get to the actual Big Week missions.This is an incredibly detailed book but that detail is framed with narrative from the pilots and crews who flew the missions which keeps it from getting too technical. This is mostly drawn from diaries and letters and gives a real in the moment feel to the book.

This would be a great book for the World War II buff. People who liked Rick Atkinson’s Liberation Trilogy or Ian Toll’s books on the war in the Pacific will really enjoy this.