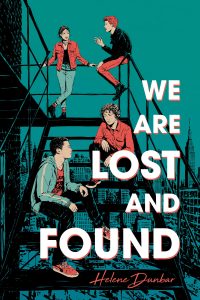 1983: a time of technological advances, great movies, music, and art. 1983: a time of terror, death, ignorance, and homophobia. For many, like Michael Bartolomeo and his best friend James, being gay means watching those around you die from AIDS while the world condemns you for who you love. Set in New York City, Helene Dunbar’s novel We Are Lost and Found follows Michael Bartolomeo during his junior year of high school while living through the AIDS epidemic. While Michael balances school work with a life, he struggles to understand what it means to be gay during a time when the rest of the world, including his Dad, believe that AIDS is God’s punishment for being gay.

This book tells the important history of the gay community and the struggle to gain acceptance and assistance during a time of fear and death. A touching story about a boy who simply wants to be himself but has to fight to understand what that might mean when the AIDS crisis affects so many of the people he’s close to. Michael struggles to find his identity, his voice, and a place to belong with his friends and family.

Through Dunbar, the reader can experience 1980’s NYC to understand the pain and suffering that 1,292 people died from in 1983; a number which only continued to rise and affect not only the gay community but those who suffered drug addictions as well. Dunbar, who received help and inspiration in writing her novel from those that lived through this time, has created a poignant and beautifully written story which will help bring more understanding to this tragic piece of history.

This book is available through the Peabody Institute Library, Danvers. You can pick up a copy today and share in this history that will not soon be forgotten.