Knowledge is a Light,” she whispered.

“Yes,” replied Malachi. “Knowledge is a Light, Lenora. Throughout history that light has at times burned very dimly, and nearly even gone out, while in other times it has blazed up gloriously.” 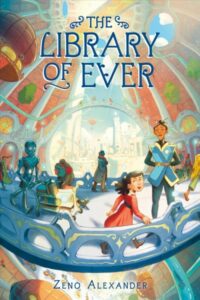 Smart and voraciously curious, eleven year old Lenora chafes at the restraints placed on her by the self-absorbed nanny her parents hired before leaving on a summer-long vacation. When an opportunity arises to escape the nanny’s notice and head off to spend a few minutes exploring the public library, she takes it. Little does Lenora know that she will soon be hired as a Fourth Assistant Apprentice Librarian. Her responsibilities will take her to outer space and the year 8000, from Mount Everest (after acquiring assistance from a pod of whales and some misplaced penguins) to a shrinking room on the back of an ant. But her new job comes with a few dangers, too, in the form of men and women always seen wearing long overcoats and bowler hats, who shadow Lenora’s every move and are determined to control the information she and the other librarians provide.

The Library of Ever is a short book packed with interesting facts and tidbits that range in subject throughout history and touch on literature and natural science. A short list of topics includes:

All facts and tidbits are delivered in context and, usually, simply defined. Kids as curious as Lenora is will likely want to pursue certain topics, to know more about Genghis Kahn, say, or to see for themselves what a tardigrade looks like (that’s an image that will stick!). The bowler-wearing men and women represent censorship, a subject Lenora grapples with throughout the book, and what she learns could serve as an open door leading to a longer conversation.

The Library of Ever blends sci-fi, fantasy, and mystery, and is the first book in a series.