A Further Account . . .
Cases of Conscience
Facsimile of an Important Witchcraft Volume

The following is a facsimile replication of: A Further Account of the Tryals of the New England Witches. With the Observations of a Person who was upon the Place several Days When the suspected Witches were first taken into Examination. To which is added, Cases of Conscience Concerning Witchcrafts and Evil Spirits Personating Men, by Increase Mather. 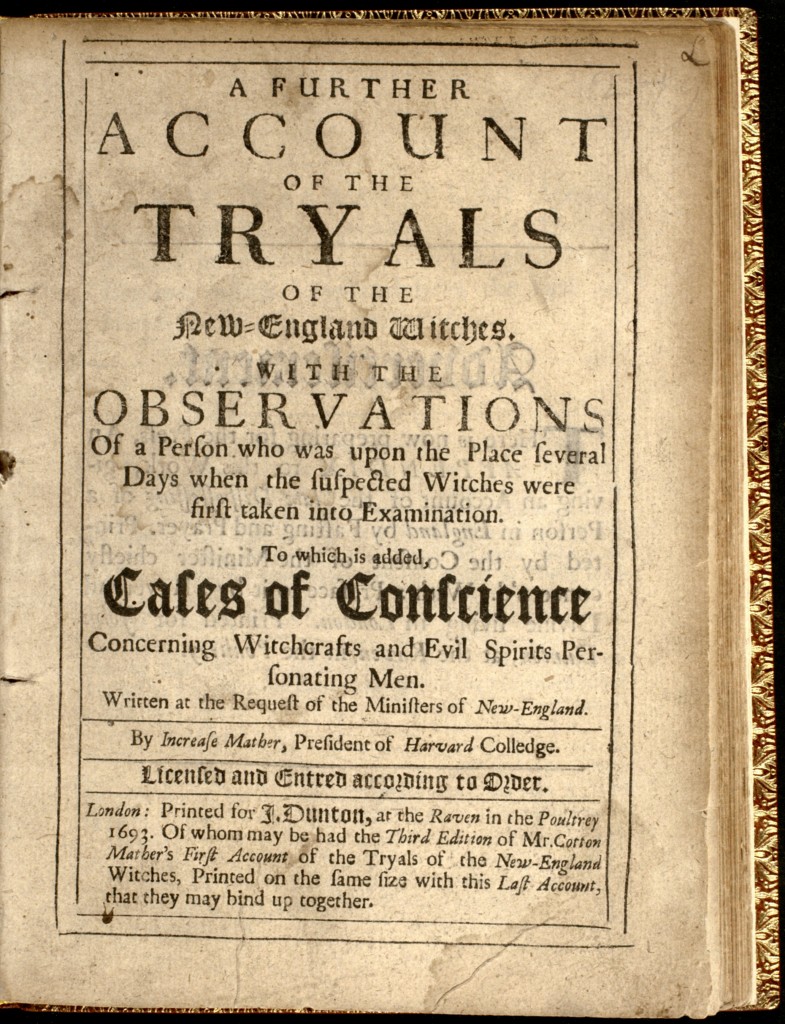 This 1693 London imprint by John Dunton is the first British edition of two of the most important publications relating to the Salem witchcraft proceedings. The volume covers both the beginning and the conclusion of the witchcraft events. A pamphlet published the spring of 1692 called, A Brief and True Narrative, and authored by Rev. Deodat Lawson contained personal observations of the early witchcraft outbreak, including of the first witch examinations in Salem Village. The first section of the new 1693 London volume is a reprinting of the Lawson narrative, followed by the thoughtful thesis written in October 1692, in which its author, the eminent Boston cleric Rev. Increase Mather, calls into question the use of “spectral” and other evidences allowed to be used by the judges in the witch trials. This combined volume provides primary source information by Lawson, a keen observer during the beginning of the witchcraft outbreak, together with the Mather essay, which put a final end to the major flaws and abuses in the witchcraft court’s legal proceedings. The two sections printed together, A Further Account, and Cases of Conscience, have separate pagination and signatures.

The original volume used in this facsimile replication is owned by the Danvers Archival Center and was acquired by purchase, utilizing Archive Special Funds, in August 1994, for inclusion within our Ellerton J. Brehaut Witchcraft Collection. The book is a small quarto volume bound in modern crushed morocco with spine gilt and gilt inner dentelles. Our volume consists of 60 leaves, including 1 blank leaf. In 2012 the book was digitized at the Northeast Document Center in Andover, Massachusetts, through the generosity of a grant by Explore.org., a direct charitable activity of the Annenberg Foundation.

Collation of the Volume

First title-page: A FURTHER ACCOUNT OF THE TRYALS OF THE New-England Witches. WITH THE OBSERVATIONS Of a Person who was upon the Place several Days when the suspected Witches were first taken into Examination. To Which is added, Cases of Conscience Concerning Witchcrafts and Evil Spirits Personating Men. . . By Increase Mather.; verso, Advertisement, 8 lines; text, with caption, A TRUE NARRATIVE of some Remarkable Passages relating to sundry Persons afflicted by Witchcraft at Salem Village in New-England, which happened from the 19 th. of March to the 5 th. of April, 1692. Collected by Deodat Lawson., pp. 1-9; text continued, with caption, A Further Account of the Tryals of the New-England Witches, sent in a Letter from thence, to a Gentleman in London., pp. 9-10; second title-page, CASES OF CONSCIENCE Concerning Evil Spirits Personating MEN; WITCHCRAFTS, Infallible Proofs of Guilt in such as are Accused with that CRIME. . . . By Increase Mather . . . .; verso blank; Christian READER., (2) pp., an attestation and the printed signatures of 14 clergymen; text with caption, CASES OF CONSCIENCE CONCERNING Witchcrafts., pp. 1-39; The CONTENTS., pp. 39-[40]; POSTSCRIPT., (4) pp.

Rev. Deodat Lawson had served as minister at Salem Village from 1684 to 1688. Upon hearing about the witchcraft outbreak in the village and that several members of his family may have previously died there under “the malicious operations of the infernal powers,” Lawson decided to visit his former abode to learn what was happening. Lawson’s observations beginning on March 19 up through the first days of April were subsequently written into a now extremely rare 10-page pamphlet titled, A Brief and True Narrative, and printed in 1692 by Benjamin Harris of Boston.

Lawson’s short though tantalizing descriptions of accusers and accused people and their actions which he observed at the Ingersoll Ordinary, Minister’s Parsonage, the Village Meeting House and home of Thomas and Anne Putnam give a broader and more personal perspective than most of the surviving court records.

On March 20, 1692, Rev. Lawson recounts several unusual interruptions which occurred during his participation as a visiting clergyman at the Sunday Salem Village Meeting House service. And on March 21 and 24, Lawson captures much of the emotion of the examinations of Martha Cory and Rebecca Nurse in his description of the scene and of the exchanges by the magistrates, afflicted persons and the accused. Lawson concludes his writings by describing “things more than ordinary about the Afflicted Persons,” and the accused.

The nine-page reproduction of the text from Lawson’s 1692 pamphlet includes new material in the form of two additional pages all printed under the title, A Further Account of the Tryals . . . , in which the author synopsizes the events up through February 1693. The author comments at the conclusion: “There were others also at Charles-town brought upon their Tryals, who had formerly confess’d themselves to be Witches; but upon their trials deny’d it, and were all clear’d; so that at present there is no further prosecution of any.” 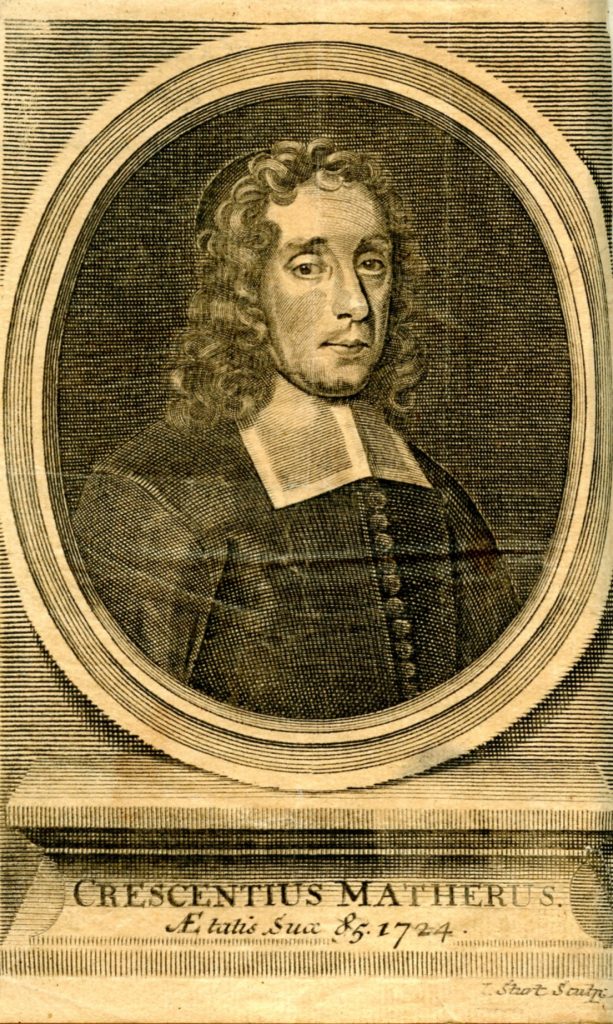 “Doubts arose, as we have stated [about evidence used in the trials], and it came about that the subject of the witch trials was discussed by the ministers on August the first [1692]. Their conclusions, unanimous but as yet vague and indecisive, were expressed in these words: “That the Devil may sometimes have a Permission to Represent an Innocent Person as tormenting such as are under Diabolical Molestations. But such things are rare and extraordinary, especially when such Matters come before Civil Judicatures.” (Cases of Conscience, p. 32.) It may have been at this meeting when the ministers requested the leading member of their association to write out a thesis with such reinforcements of authorities as his scholarship could provide. Therefore [Increase] Mather wrote his book. It is a legal brief without legal phraseology, of the law pertaining to witchcraft, in which precedents are cited and interpreted; it is really a simple codification, which the judges and the governor could plainly read and safely follow. The whole question turned upon the nature of evidence.

In the first two paragraphs, the author flatly challenges and corrects the central error of the witch court by decisively kicking the bottom out of the validity of spectral evidence. He says:

‘The First Case that I am desired to express my Judgment in, is this, Whether it is not Possible for the Devil to impose on the Imaginations of Persons Bewitched, and to cause them to Believe that an Innocent, yea that a Pious person do’s torment them, when the Devil himself doth it, or whether Satan may not appear in the Shape of an Innocent and Pious, as well as the Nocent and Wicked Person to Afflict such as suffer by Diabolical Molestations?’

However by the time the manuscript was completed on October third and read that day before a meeting of the ministers again at Cambridge, the trials under headstrong Chief Justice Stoughton, had gone so far – twenty-five persons having been condemned, twenty of whom had been executed – and circumstances indicated so definitely that innocent persons were being drawn into the net of accusations, that Mather hastily secured the endorsement of his work by the fourteen ministers and at the earliest moment laid the manuscript before the governor, mostly probably with recommendation for action to shut off the procedure of the court until a better basis for judging the cases could be found. Which indeed was already found and now presented in the finished manuscript with the signed approval of the foremost men then living in the Province.

When the trials of the remaining prisoners were resumed in the Superior Court in the following January, spectral evidence was not accepted; that is, the rules in Mather’s book were adopted.”

We are pleased to present this important London edition, now housed within the Ellerton J. Brehaut collection of the Danvers Archival Center, in facsimile form for study purposes. 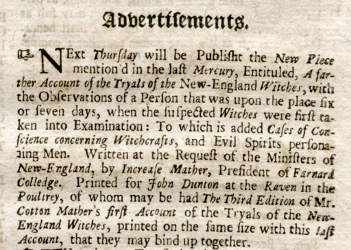