in the Dried Prunes Box

By
Richard B. Trask

A humid, musty smell permeated the old cellar walk-in vault at the Danvers Town Hall. It was the summer of 1969, and I was working for the local Historical Commission as a summer cataloguer and researcher, trying to put into order the thousands of town records. Most of the loose, individual town papers were enclosed in nailed wooden boxes as a result of a W.P.A. project in the 1930s when the records were roughly sorted into various departmental categories. The boxes had originally been used in food relief during the depression and were clearly, and to my eyes humorously, marked, “Dried Prunes-For Relief-Not to be Sold.” Unfortunately, the boxes were not good for storing manuscripts, and many of them had become nesting areas for all sorts of vermin. 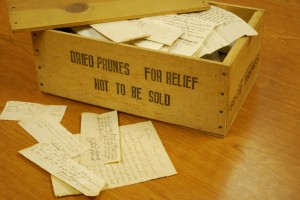 I was going through one box of the town treasurer’s papers, including town bills from 1757 to 1798 and orders from 1741 to 1788 for the treasurer. The papers were well preserved as a result of the superior rag stock used in manufacturing paper during the eighteenth century. They were of all imaginable sizes, from mere scraps no wider than one and one-half inches to large folio sheets. The handwriting ranged from almost illegible scrawls of hardworking, barely literate yeomen to the well-cultivated script of educated gentlemen. These were the invoices, bills, accounts and receipts of Danversites presented to the town for services rendered.

A typical request for reimbursement in 1780

One slip of paper dated 1773 showed that the town of Danvers owed John Putnam 5 shillings for the services of himself and his horse for one and one-half days. What services he and his horse gave to the town on that particular occasion over two hundred and thirty years ago we shall never know. Joseph Poor’s services to the town in 1778, however, were well recorded. He charged the town 8 pounds for boarding “Eunice Tucker sick with the Small Pox & Nurse’s Board 3 weeks.” Nine shillings were spent for a bottle of wine, presumably for medicinal purposes, and 6 shillings for two lemons, and 6 shillings 6 pence for “one pound of plums & one quart of oatmeal.” William Trask charged the town 3 pounds in March, 1778, “for macking a coffenn for the Whedow Duexbury,” one of the town’s poor. He apparently overcharged for the service, as on the back of the bill he acknowledges receiving payment in full of 4 shillings less than his original invoice. On March 5, 1778, Selectman Stephen Needham submitted a bill requesting reimbursement for a number of services to the town including “To 330 pounds of Gunpowder for 82 pounds, 10 shillings.” He also listed “To my Expenses to Boston, supper, horse keeping, breakfast & lodging, Dinner & Drink” at 1 pound 7 shillings. Also charged was “To 1½ Day my self to bring the Powder” and “to a horse & carriage to bring the powder” at 3 pounds, 7 shillings.

Dr. Samuel Holten, who served the town of Danvers in numerous posts, including selectman, town clerk, assessor and treasurer, submitted many expense accounts to the town for payments. One bill, dated between March 1773 and January 1774, included such expenses as “To 1 quier of paper 1 (shilling) 2 ½ (pence). To 1 day myself & horse taking a plan of sd Highway with Mr. Batchelder 2 (shillings) 8 (pence). To cash pd Mr. Williams for a Book to Record Marriages, 6 (shillings). To journey to Salem to advise with Mr. Lowell about negro 1 (shilling) 4 (pence).”

Holten later held positions in the Provincial and the Federal government. In 1774 he became a member of the Massachusetts Provincial Congress and subsequently served nine years in the Continental Congress. In 1778 he won a place in history by signing the Articles of Confederation, our first constitution, and in 1785 he served as President of the Congress.

Resting in this one box were hundreds of accounts of work done and energy exerted by Danversites of many generations past. All of these papers had stories to tell, most involving everyday events, but all reflecting local and national history.

Among these handwritten slips of paper, I noticed a very handsome item containing a fine engraving of the shoulders and head of a turbaned and mustachioed man with banners about him proclaiming, “John Piemont. Turk’s Head, Danvers.” The item was a trade bill of John Piemont’s eighteenth-century Turk’s Head Tavern, which was located on the old post road near what is now the junction of Pine and Sylvan Streets in Danvers. Subsequent to discovering the identity of the trade bill’s printer, I learned from Dr. Richard P. Zollo, who wrote an interesting study on the life of John Piemont titled, “Patriot in Exile,” that Piemont was a Frenchman who settled in Boston in about 1759 and took up the trade of peruke [wig] maker. While residing in Boston, Piemont apparently became enmeshed in the patriot cause. He was a member of St. Andrew’s Lodge of Masons and was actively involved in the events leading up to the Boston Massacre of 1770. In 1773, partly as a result of losing Tory patronage at his wig shop, Piemont moved to Danvers and took on the management of a tavern. 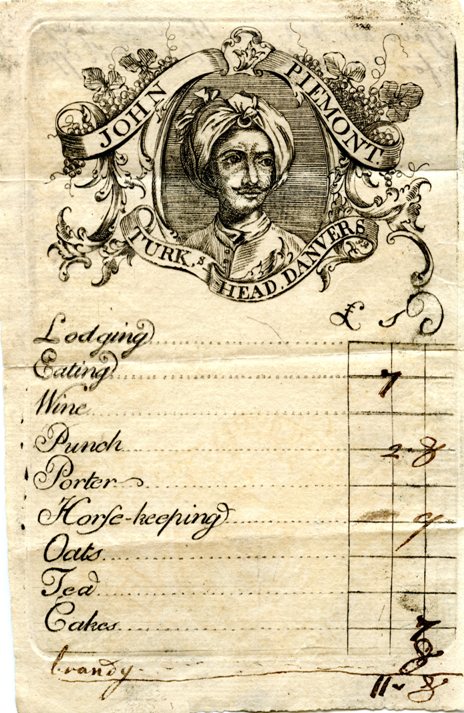 The trade bill, measuring approximately 6½ inches x 4 inches, contained the engraving of the man, surrounded by a garland of grapes. Included was a printed list of services available at the tavern, with space to the right to indicate the patron’s charge. The services listed were “lodging, eating, wine, punch, porter, horse-keeping, oats, tea, and cakes.” On the reverse of the bill was a hand written statement reading “Gave an ordr. on the Town Treasr for the within acct. Novr. 1 st 1773.” This item was a bill to the town of Danvers for entertainment during a Board of Selectmen’s meeting held at the tavern. The custom of having town business conducted at taverns was common, since taverns were centrally located, congenial, and large enough to conduct business. The handwritten notation at the bottom of the bill indicates that the selectmen had refreshments before, during, or after their meeting. The town was billed 7 shillings for eating, 2 shillings 8 pence for punch, 9 pence for horse-keeping, 7 pence for cakes, and 8 pence for brandy; a total bill of 11 shillings, 8 pence. The bill was sufficiently handsome and unusual to warrant its being separated from the bulk of other material, and I put it aside, hoping to find out more about it. 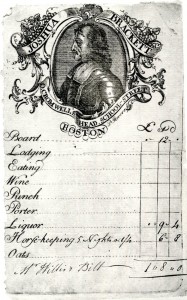 Months later, while browsing in a local book store I was looking through a book titled Paul Revere’s Engravings by Clarence S. Brigham. A plate in the chapter on trade cards caught my eye. A bill from Joshua Brackett’s “O. Cromwell’s Head” tavern on School Street in Boston, was reproduced. The design, format and size of this Revere engraving was almost identical to the Piemont bill that I had found. I quickly looked in the index for “Piemont” and was referred to page 175, which stated that Paul Revere’s day book included many charges for engraving advertising cards and bill heads, but that no specimen remains of many of them. In June 1774 Revere made two hundred prints for a charge of 8 shillings to Mr. John Piemont. The author went on to say, “It is not known whether this charge was for bill-heads, or for blank Masonic notifications. Piemont was a prominent Mason, and became an inn-keeper at Danvers in 1773. The charge of 4 shillings, per hundred prints, however, is lower than Revere’s usual charge for stock Masonic notifications.” This Revere notation was most likely a reorder by Piemont of the blank bill-heads.

After looking at this book, I was now quite sure I had discovered the mystery

of the bill found within the town records, and it was a most exciting explanation. The next day I examined the Piemont bill and noticed two initials just below the “S” in the word “Danvers.” The initials of the engraver were very plainly marked “P.R.” Among the records of the town of Danvers a previously unknown Paul Revere engraving had been discovered.

Later correspondence with the American Antiquarian Society of Worcester enthusiastically confirmed the fact that a hither-to unknown Revere engravings had been located in Danvers. In 1972 the Danvers Archival Center, a municipal archives which houses all the public and many private collections of papers relative to Danvers, was created to house all of Danvers’s historic books and records. We decided to use a copy of the engraving portion of the Piemont bill as the upper portion of bookplates used for our Archival book collection.

Since 1969 many Revolutionary War period items have been similarly uncovered in the town records. These discoveries include notes written or signed by Revere, Sam Adams, and John Adams, as well as many very rare broadsides. There are undoubtedly countless historically valuable documents still resting in town clerk vaults, historic societies and other depositories throughout New England awaiting discovery. 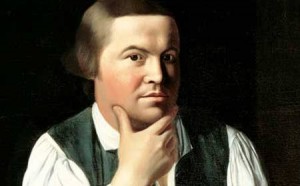 Paul Revere in 1768 from the portrait by John Singleton Copley