George Augustus Peabody and His Urn
By
Richard B. Trask 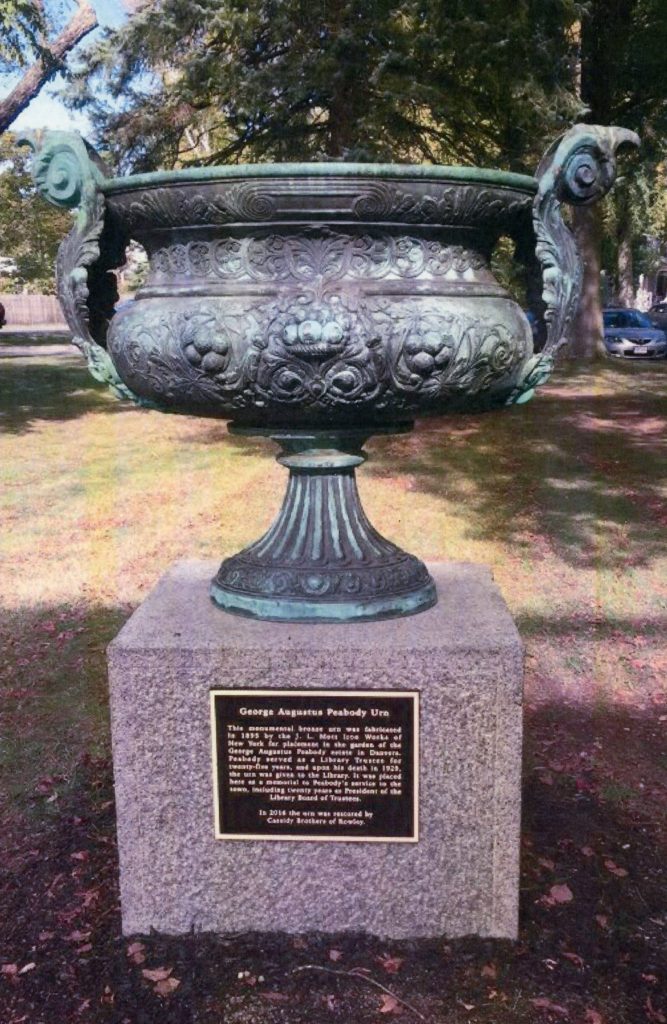 George Augustus Peabody was born in Salem, Massachusetts on August 23, 1831, to George and Clarissa (Endicott) Peabody. He attended Harvard University, graduating with the class of 1852, and received an L.L.B. degree in 1855. Though admitted to the bar, Peabody never actually practiced law as a profession. In 1881 he married Augusta Jay Balch Neilson, and purchased the 250-acre Burley Farm in Danvers as a newlywed residence. Though his beloved wife sadly died in 1888, Peabody continued to live at the estate until his death on May 3, 1929. In the “Milestone” section of the May 13, 1929, issue of Time magazine, the deceased Peabody was described at his death as the “oldest living graduate of Harvard College, gentleman farmer, big game hunter and world traveler.” 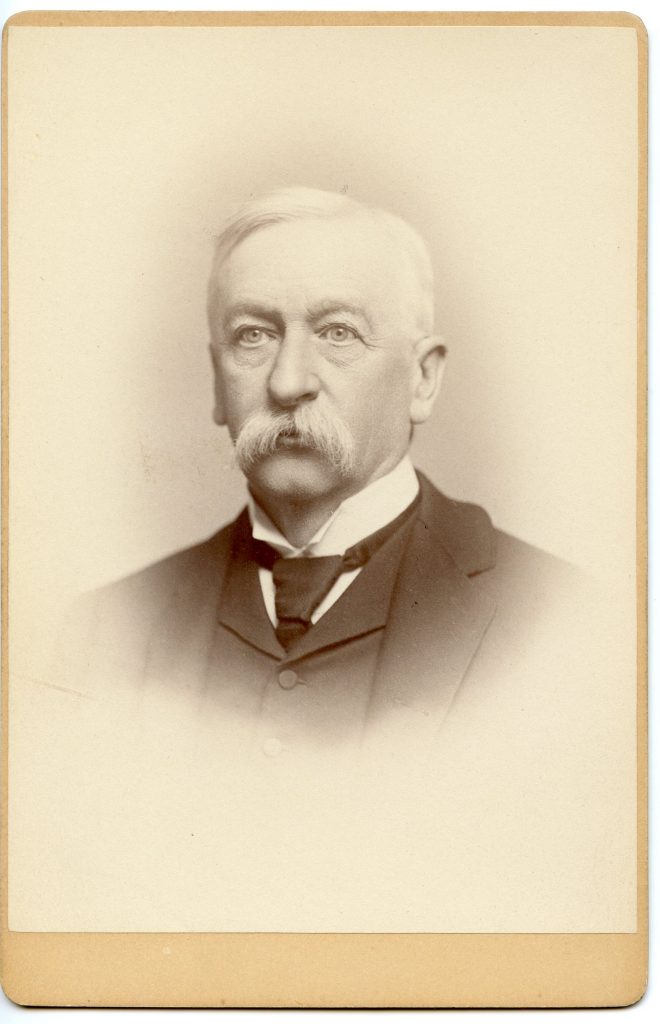 Peabody had developed and gentrified his extensive Burley Farm. Part of the estate included a large, formal garden, and in 1895 Peabody desired to place a large architectural urn or vase in the center of the garden as a focal point. He drew a sketch of the urn he wanted and contacted a facilitator, Berkeley Balch of New York City, about procuring such a massive ornament. The terms “vase” and “urn” seem to have been used interchangeably. Balch researched the options. At the time there were two firms considered the best in the country for such custom work.

The company chosen for fabricating the Peabody urn was J. L. Mott Iron Works, which had been established in 1828 in New York City. The urn to be created was described as a solid, stationary bronze vase similar to plate 14L in their catalogue, which could be “well executed of good workmanship” at a cost of approximately $560. The casting was estimated to take about six weeks. 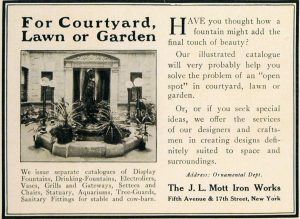 Initially molded in clay, the urn was then cast in plaster to provide moulds for the final bronze casting. The ornamental department of J. L. Mott moulded the urn in late March 1895, and cast the two halves. One half of the bronze cast was made in early April, but the opposite cast was not successful and was broken up with the casting needing to be done over again. By May 16 the “crate with vase within marked at 695 lbs.” was shipped to Danvers with the Mott people saying “that it is very well done and that they think it’s a beautiful piece of work.” The urn arrived by rail and was installed on a granite block especially prepared for it in the center of the Burley Farm garden. 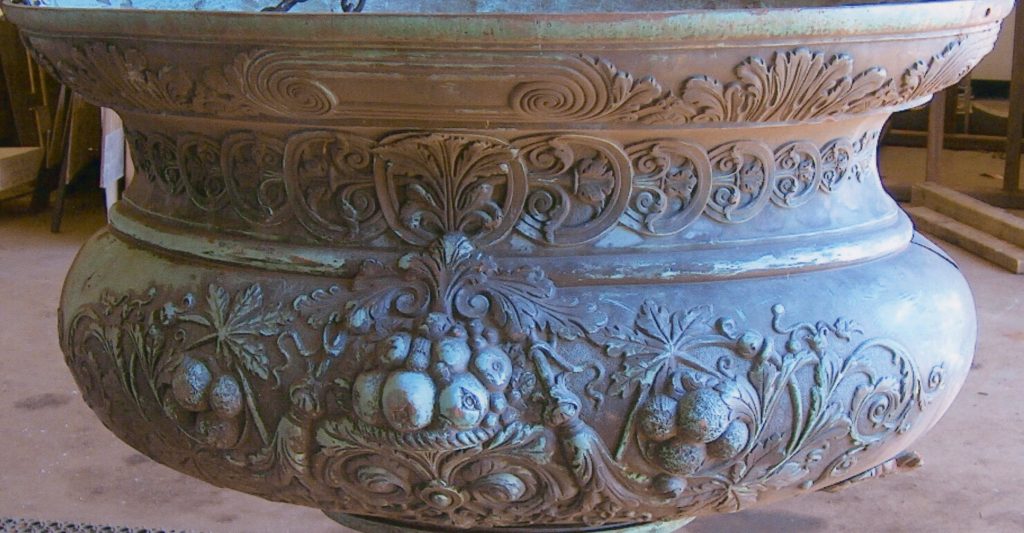 Mr. Peabody served for twenty-five years as a trustee of the Peabody Institute Library in Danvers, being its President from 1896 to 1916. He was also connected with many other local organizations, charities, and societies, including serving as director and later as President of the Peabody Museum of Salem. His will provided $10,000 each to the Danvers Visiting Nurse Association, the Danvers Historical Society, and the Town of Danvers for its public parks. Executers of his estate were his nephews George P. Gardner and William C. Endicott, also a trustee of the Peabody Institute Library. On May 13, 1929, the executors informed the library trustees of a $40,000 bequest to the library which gift was formally recorded in the Trustees’ record book. The trustees also recorded in their minutes for January 8, 1930, that they were “pleased to accept a bust of the late George Augustus Peabody.” That marble bust is now located in an alcove near the library’s front entrance.

On July 23, 1929, the executors wrote the trustees the following letter:

We desire to present to the Peabody Institute a large bronze vase with a granite pedestal, which belonged to the late George Augustus Peabody of Danvers, and which has stood for many years in the centre of his garden at Burley Farm.

By 1930 the bronze urn and granite pedestal were installed on the northeast grounds of the library to the right of center of the library main entrance.

The granite block upon which the urn rested was 30” tall and 35½” long x 29½” wide above ground. No inscription or plaque was associated with the installation, and flowers were generally planted within its oval open top. The urn was attached to an 18” tall bronze pedestal with an oval base of 22” x 17”. The bronze urn itself is highly decorated with leaf, fruit and geometrical motifs and with two intricately detailed handles attached.

In about 1995 the urn body was toppled off its bronze pedestal and a decision was made to remove the pedestal itself and reposition the urn body onto the granite block. And there it remained, somewhat obscured by subsequent tree growth, missing its delicate pedestal, and with the granite base becoming grimy through years of weathering.

Then, on the dark of night of July 30, 2010, a local thief stole the massive bronze urn from off its granite pedestal and loaded it into a truck. He then secreted away this public art-work to sell for scrap metal. Several days later an employee at a scrap metal yard in Everett, Massachusetts called Danvers police concerning several suspicious items brought there. The perpetrator was subsequently arrested and served a term in jail, but with no recompense given the Library. The broken urn was brought back to Danvers. It was severely damaged, being cracked, stove-in on one side, missing rivets, and with one of two handles broken off and missing.

This monumental and artistically significant bronze piece had, for 80 years, served as a silent tribute to longtime Library Trustee President and donor George Augustus Peabody, as well as a lovely public ornamental art work to be enjoyed on the grounds of Peabody Park. Now it was a pile of broken bronze pieces relegated to dead storage in a corner of the Danvers DPW garage. 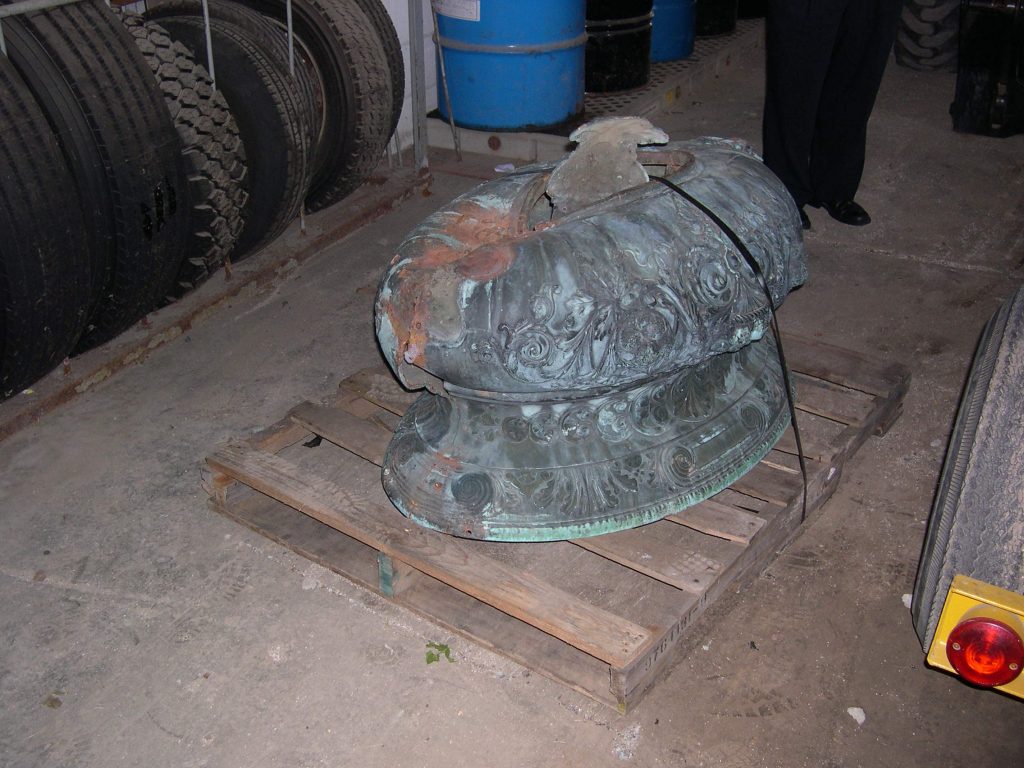 Then in 2014 the Peabody Institute Library Board of Trustees, after all avenues of acquiring restitution were exhausted, decided to take on the project of restoring the memorial urn and its base. Trustee Charles Desmond was made chairman of the restoration sub-committee, with Trustee President Michael Hagen and Trustee Julie Curtis, as well as Librarian Alan Thibeault and Archivist Richard Trask also serving on the committee.

Craftsmen at the nationally known Cassidy Bros. Forge in Rowley, Massachusetts committed to the careful restoration of the urn at an estimated cost of $16,880, with an additional $2,400 for its reinstallation with the use of a crane.

Through the George Peabody Society, $10,000 was initially pledged for the work, while all the trustees and some of the Library staff also donated over $2,000 to the fund, some of the money being given in memory of former Trustees John L. George and Frank Tyrell, Jr. The Danvers Cultural Council also gave a $1,000 matching grant for the urn’s restoration, while the Eastern Bank Charitable Foundation, Advanced Private Investigators, and Danversbank Charitable Foundation also gave substantial donations.

In June 2016, under the title “Urn returns to Danvers library – Antique artwork was stolen 6 years ago, recovered by police,” Salem Evening News staff writer Ethan Forman wrote the following excerpted article about the completion of the urn restoration:

“Plans are underway to return the George A. Peabody garden urn to the library grounds after a nearly six-year absence. The antique urn was stolen from its pedestal next to the library entrance in July 2010. Police recovered it after a Danvers man sold it to a scrap metal dealer in Everett.

This week, the library plans to rededicate the 121-year-old, cast bronze urn, which has been restored after being damaged as a result of the theft. Library director Alan Thibeault said it cost $19,200 to restore the urn and have it lowered back into place with a crane. Cassidy Brothers Forge in Rowley did the restoration work over the past several months.

To mark the return of the urn, a brief ceremony will be held Sunday, June 26, during an artists’ reception for the outdoor sculpture exhibit, “Celebrating the Art of Sculpture 2016,” on the library lawn. This time, Thibeault vowed, ‘it will be a little better secured.’

For years, the urn was stored unceremoniously in a barn at Endicott Park while the library trustees raised money for the work. Town Archivist Richard Trask was among those who lobbied hard to get the urn restored. ‘It is a work of art,’ Trask said. ‘It is a very important casting, done by a very well-known foundry in New York City. I was damned someone would do something like that and it would be forgotten.’ Trask made sure it wouldn’t be forgotten by writing a history of the urn.

Peabody had a long relationship with the Danvers library, serving as a trustee for 25 years and as its president from 1896 to 1916. He was also a major donor to the library. The executors of Peabody’s estate gifted the urn to the library, and it and its massive granite pedestal were installed by the library’s entrance in 1930. 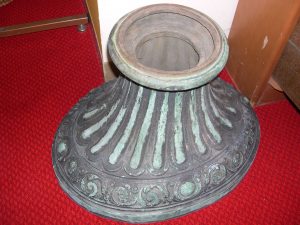 Around 1995, the fluted bronze base of the urn failed, and the vase toppled off its pedestal. The urn was put back on its pedestal, and the base was stored in the library’s Archival Center where Trask works. Some say because it was just resting on a pedestal, the thief may have been able to back up a pickup truck and roll the heavy urn into the truck bed. Trees had also grown up around the urn, blocking the view of it. 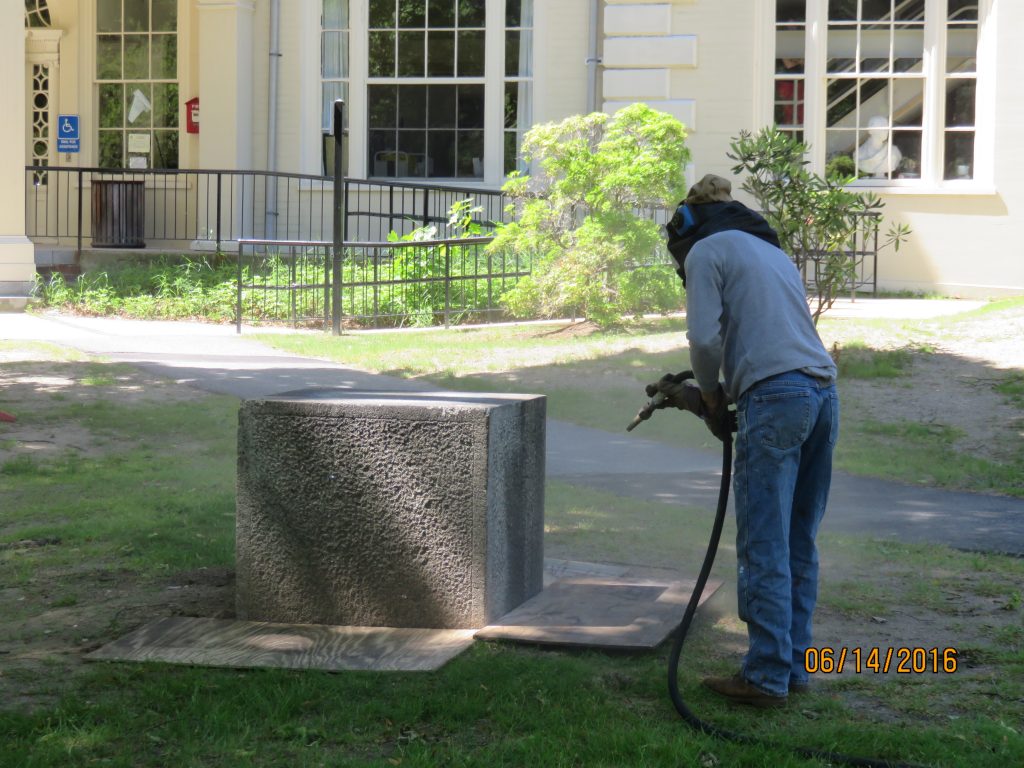 To improve security now, Thibeault said trees will be trimmed back, lighting will be improved and the urn will be bolted to the base. Thibeault said Cassidy Brothers Forge kept the work as inexpensive as possible, and stuck to the original estimate from six years ago.

The thief ‘did a tremendous amount of damage to this urn,’ said Maurice Cassidy, president and CEO of Cassidy Brothers. He said it appeared someone beat the urn with a sledge hammer to make it look like it had been damaged beyond repair so the scrap yard would accept it.

Cassidy said he put his best metalsmith, Al Murphy of Methuen, on the job, and allowed him to take all the time it needed. Part of the work included casting a new acanthus leaf detail for the handle that had been broken off. Cassidy said the urn is a ‘pretty valuable piece,’ worth upwards of $100,000. ‘This was really a labor of love,’ Cassidy said.”

Two framed sheets of paper have been placed inside near the front entrance of the library listing the donors, and a brief description of the significance of the urn, while a new bronze marker has been mounted on the newly cleaned massive granite base upon which the urn is mounted. 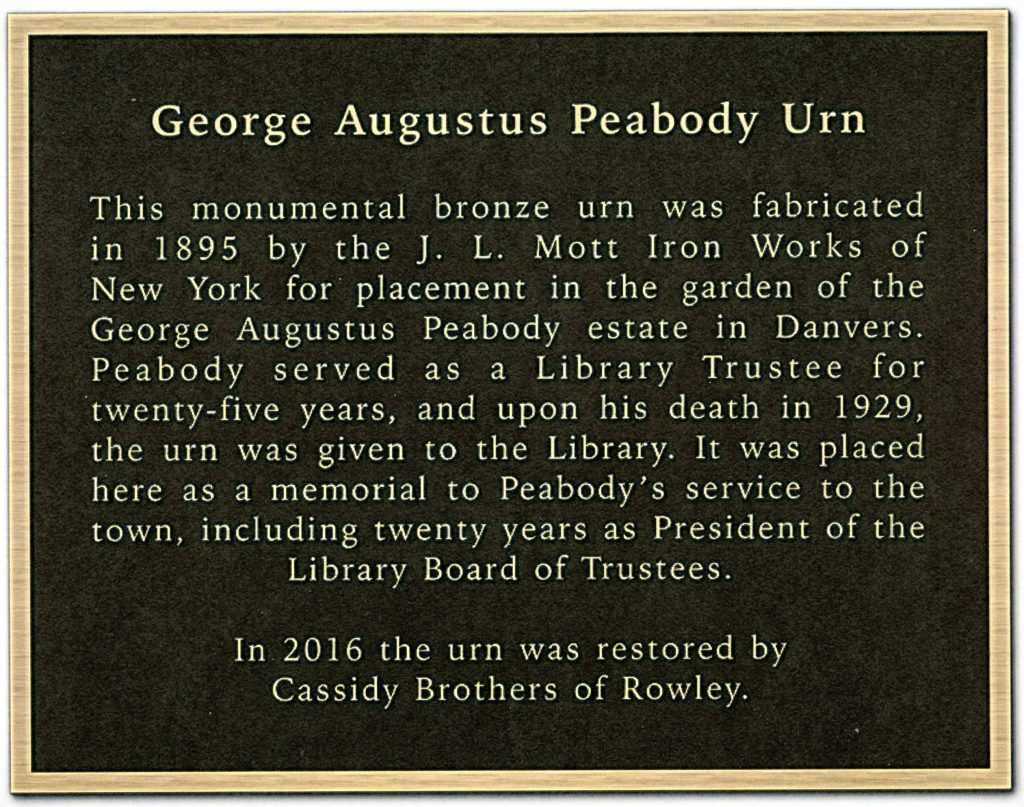 The restored urn was dedicated on Sunday, June 26, 2016. Dr. Charles Desmond and Richard Trask gave brief remarks to the over 60 people in attendance. 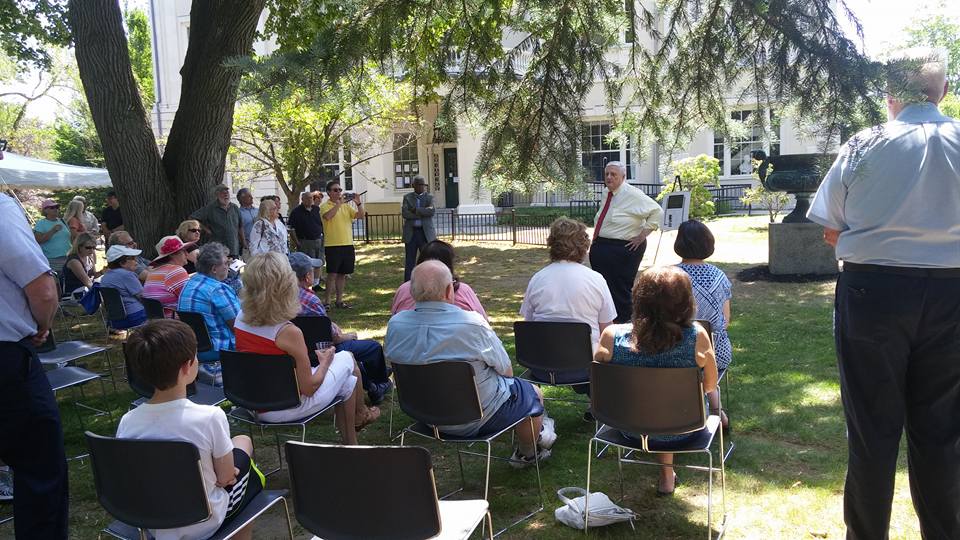 According to Richard Trask, “This monumental and artistically significant 700-pound bronze piece has served generations as a silent tribute to longtime Library Trustee President and donor George Augustus Peabody, as well as a lovely public ornamental art work to be enjoyed on the grounds of Peabody Park. Thanks to the Library Board of Trustees, several organizations, Cassidy Brothers, and local contributors, the forces of darkness were not allowed to get away with destroying this small but significant object representing our local heritage, 19th century art, and our memorials.” 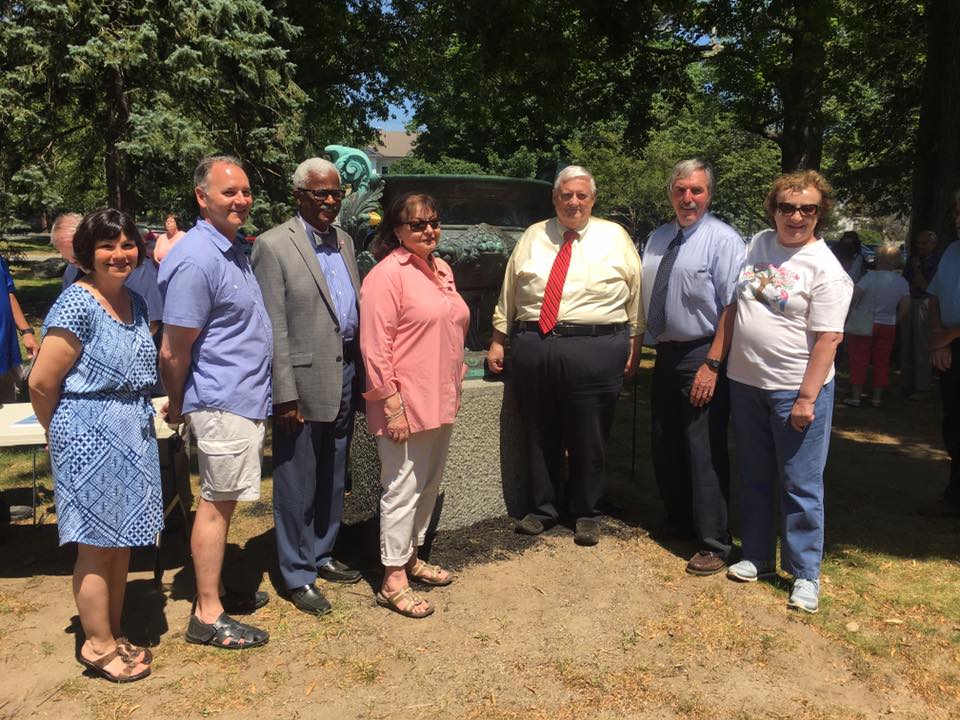