The Albion F. Welch House
By Richard B. Trask

The following are excerpts of a report submitted to the Danvers Preservation Commission, at their request, to assist in determining if the dwelling at 22 Conant Street was historically significant, in order to place a 6-month delay upon the owner wanting to tear it down for a 30 space parking lot. The delay afforded the Commission and other interested parties some time to find and present alternatives to the owner to preserve the structure.

A 6-month demolition delay was imposed on the dwelling beginning on October 29, 2014. Alternatives presented included removing the rear 20th century portion of the structure and the side porte-cochere, which would afford the creation of 20 parking spaces. When this proposal was rejected, an alternative of moving the 1894 portion of the house to a recently vacant lot on Sylvan Street  was suggested, but not taken. On August 17, 2015, the entire structure was demolished to make room for a church parking lot. Preservationist Matt Pujo videotaped the demolition, a portion of which, with his kind permission, is included below. The full version is available on YouTube under “Mackey Funeral Home Demolition – Danvers, MA.” 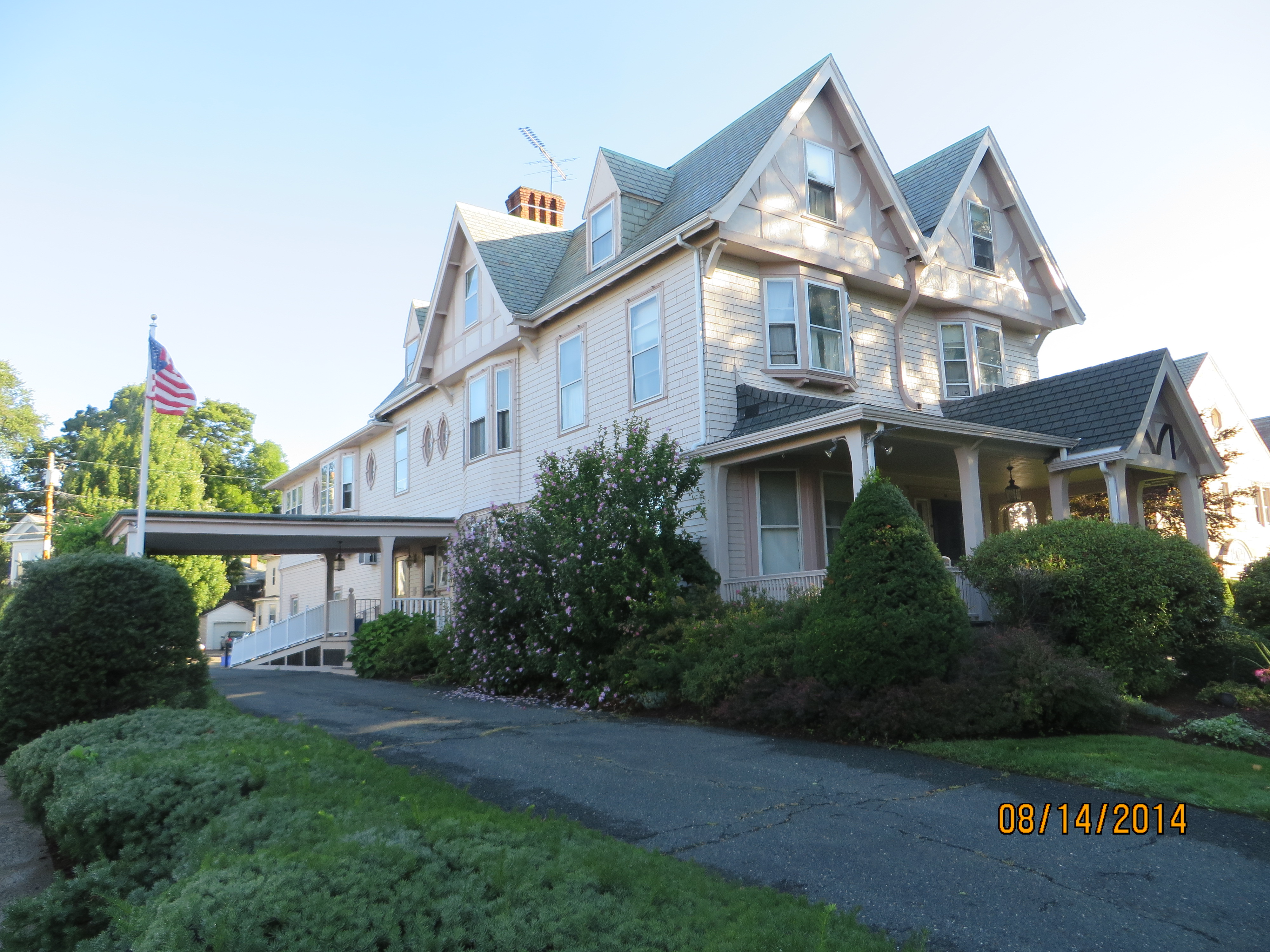 This beautifully original, well kept, and stand-out structure located at 22 Conant Street is a familiar site to all local citizens. It is positioned at what is now the residential head of Conant Street. The house is one of the few late 19th century high style dwellings still surviving upon a main thoroughfare within the Danvers business district. It situates well with the fine Romanesque style Saint Mary of the Annunciation Church located next door, and with several other late 19th century houses located further down the street. Anyone with half an eye can see the building’s significance to the streetscape of Conant Street with regard to height, setback and visual integrity.

As it stands today, this 1894 dwelling is a wonderful example of the Queen Anne Revival architectural style popular in the United States between about 1875 and 1900. Elements of the Stick Style are also incorporated within the house design. The Queen Anne style is the most decoratively rich of 19th century domestic architectural styles, which incorporates a variety of textures, forms, materials and colors. Amazingly, the exterior of this 120-year-old original dwelling has not been destroyed, trashed, or altered to any major degree. The several additions to the house have been treated sympathetically to the main building, while the myriad of original exterior details have been retained. A photograph spotlighting this beautiful, brand new house in the 1899 local promotional book, Danvers, Massachusetts: A Resume of Her Past History and Progress, pictures a dwelling in almost the same state as it exists today. Such a pure example is worthy of note.

The stylized characteristics of this dwelling read like a guide to the Queen Anne Revival and Stick style of the late 19th century, which was a romantic, spontaneous reaction to the academic correctness of many earlier styles, fostered by the infusion of new wealth. 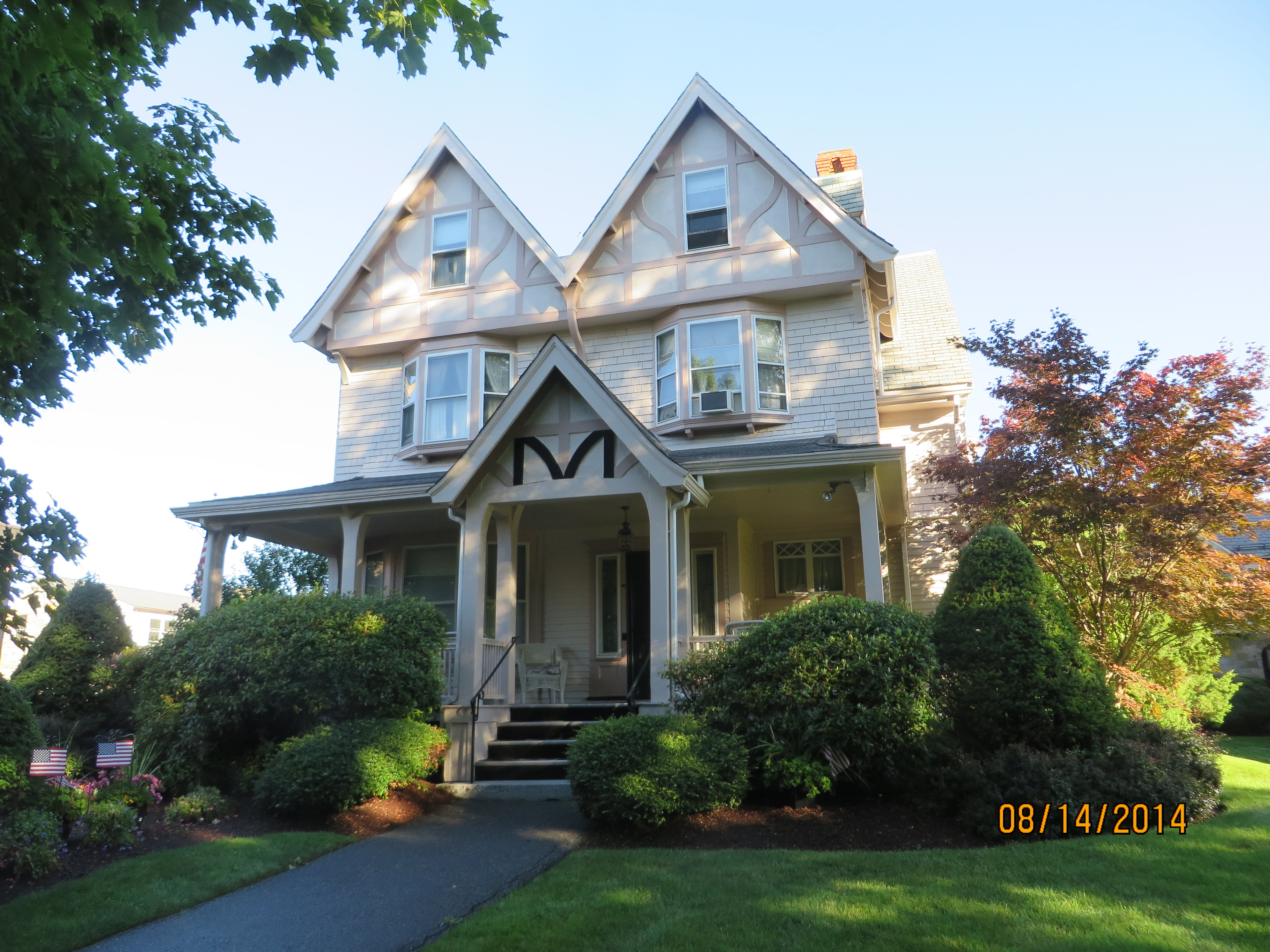 Of 2 ½ stories, the building is of irregular silhouette, possessing complex gables, steep rooflines, and tall, decorative chimneys. The façade includes paired roof gables with straight and curved half-timbering motif, a second floor with shingle wall texture and paired bay windows. The façade’s first floor exhibits clapboarding and a porch with an integral front decorative gable projecting above it. The second floor shingled texture runs around the house projecting slightly over the clapboarded first floor below. On the sides are other Queen Anne features including pedimented dormer windows projecting out of the roof, two 2-story projecting bays (one pronounced and one subtle), a slightly curved side gable with stick elements and bracketed to project off the roofline, and paired oculus windows. The roof is of slate. 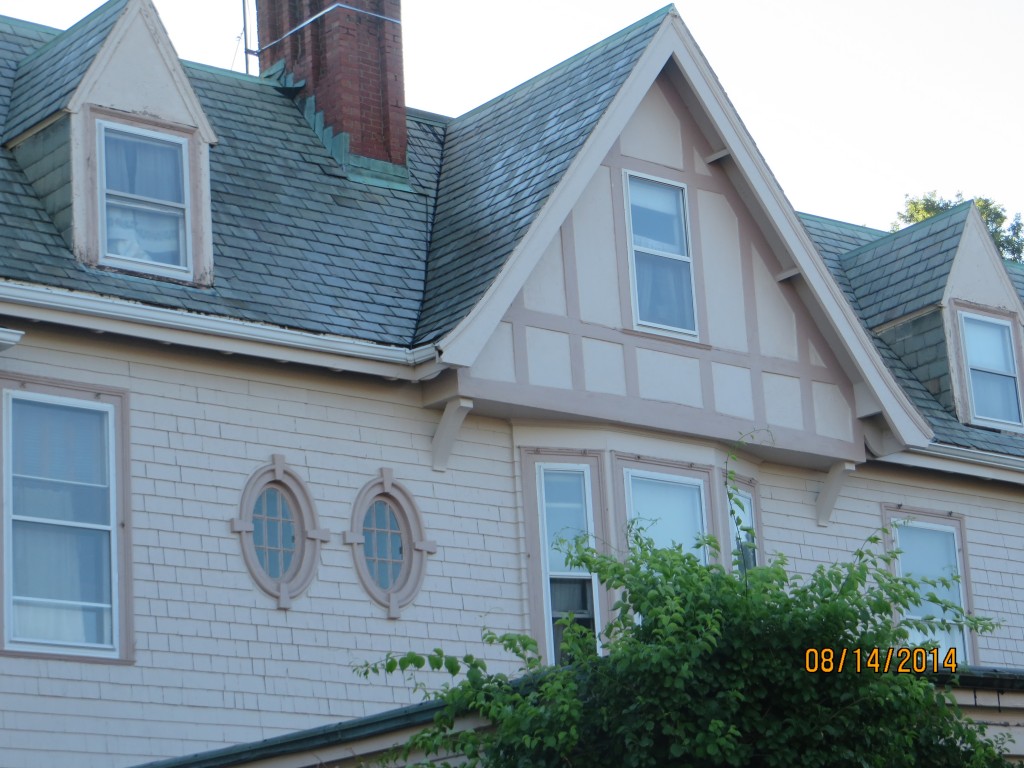 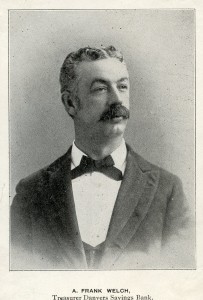 Original developer of the house was Albion Franklin Welch. Welch was born in Danvers February 25, 1851, to Jacob and Isabel (Hatch) Welch. His father was a native of Sanford, Maine and a shoemaker by trade, while his mother had been born in Bennington, N.H. A life-long resident of Danvers, Welch was known variously as “Albion F.” and “A. Frank.” He attended and graduated from Holten High School in 1868. On April 25, 1880, he married Miss Carrie C. Magoun of South Boston. Beginning as a clerk in the First National Bank of Danvers, Welch eventually obtained a position in the Danvers Savings Bank. Both banks shared half the ground floor of the 1854 Bank Building on the corner of Maple Street and Central Avenue. The Danvers Savings Bank was incorporated in 1850. In 1884 Hon. Augustus Mudge was chosen President of the bank, and in 1889 Welch was made Treasurer, a position he held till his death.

Welch was also involved in Danvers town government serving as Town Treasurer from 1882 to 1887, and auditor from 1889 to 1902. He was also very prominent in freemasonry, holding the highest honors. He was master of Amity lodge and high priest in Holten Royal Arch chapter, besides being a 33d degree mason and potentate of Aleppo temple, Mystic Shrine, of Boston.

In 1894 Welch contracted for the building of his new home on a lot of land on Conant Street, only a stone’s throw from the Savings Bank. Boston architect Arthur F. Gray designed the stylish Queen Anne dwelling. Gray was noted as being both an engineer and a mill architect. Among his various works were several churches, including in the 1920s the Church of the Redemption on Boylston Street, built for the Universalist Society and now a Catholic Church, St. Clement Eucharistic Shrine.

The local newspaper, The Danvers Mirror, included occasional brief notices about the progress in building the new dwelling. On May 26, 1894, it noted: “A. F. Welch has bought a house lot next to M. A. Hall’s, on Conant Street.” By August 25 the paper reported that the “Cellar of A. F. Welch’s new house on Conant Street is nearly completed, Arthur Gray of Boston is the architect.” Then in the September 29, 1894, issue, the paper informed its readers, “The frame of A. F. Welch’s new house on Conant Street has been raised this week.” The family moved in by the new year, and in 1898 the lot of 13,100 feet was valued at $1,500, while the house was taxed at a value of $6,000. 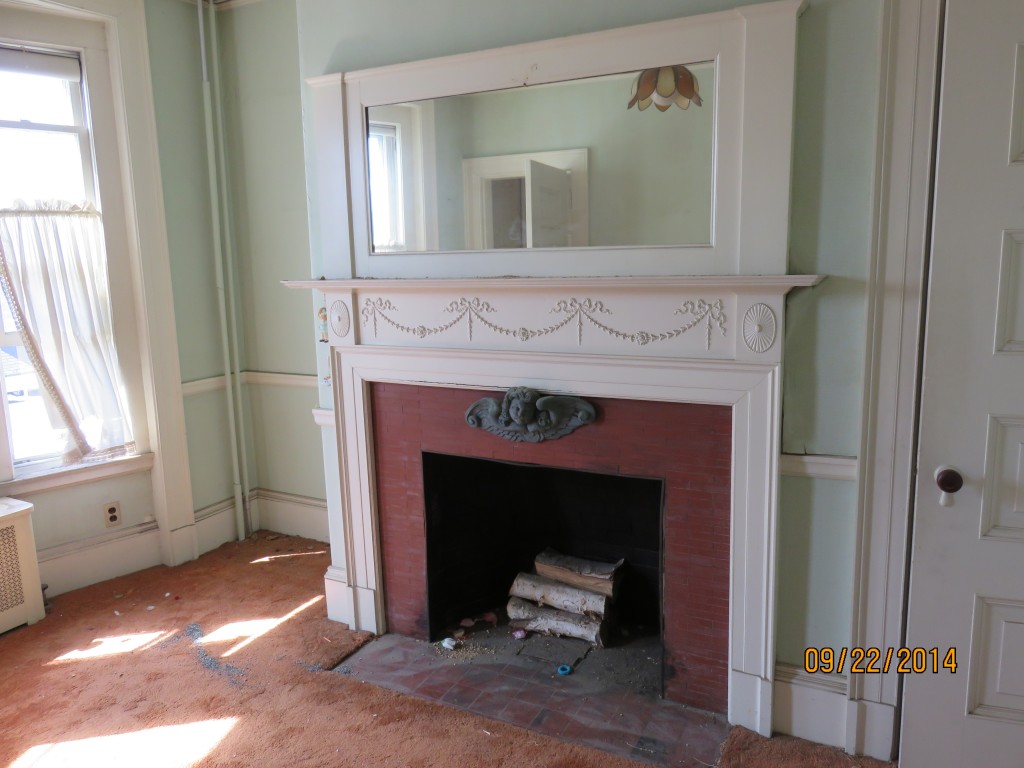 Welch died at home September 9, 1902, at about 3:45 pm, though he had worked at the bank the day before. In a long article which featured a large photograph of Welch, The Danvers Mirror noted, “He was a kind and loving parent and will be missed by all citizens, with whom he was held in high esteem for his integrity, honesty and fair dealing. In his accounts as town auditor he was very exacting and filled the position as no one else could.”

A meeting of citizens was held at Town Hall which drew up resolutions concerning Welch’s passing, and downtown merchants closed their businesses during the funeral. He was buried in Walnut Grove Cemetery.

Various other owners possessed the residence, including Arthur D. and Harriet D. Powers in the 1920s and early 30s. Powers was listed as a clerk and in 1929 the house was valued at $8,400. In about 1942 local businessman Raymond A. Sullivan purchased the home and utilized the first floor for a Funeral Home. About that time he added a porte-cochere on the town side of the building and a concrete block addition to the rear of the house, which eventually was expanded into a 2-story ell, which exterior was clad to match the house exterior. A two-car garage was incorporated into this first floor attachment.

Mr. Sullivan operated the funeral home into the 1960s, with Elias J. Mackey partnering as Mackey & Sullivan, and in the 1970s becoming full owner.

This beautiful, architecturally significant building of great importance to the streetscape of Conant Street absolutely deserves to be preserved. To lose this house for another local parking lot, almost next to two adjoining parking lots and within a short walking distance to half a dozen other parking lots, seems a sinful waste of resources which went into this grand building’s construction. It is a perfectly viable structure that could be used for many other potential adaptive uses. This is not a derelict property, but adds positively and significantly to the built environment of downtown Danvers…. 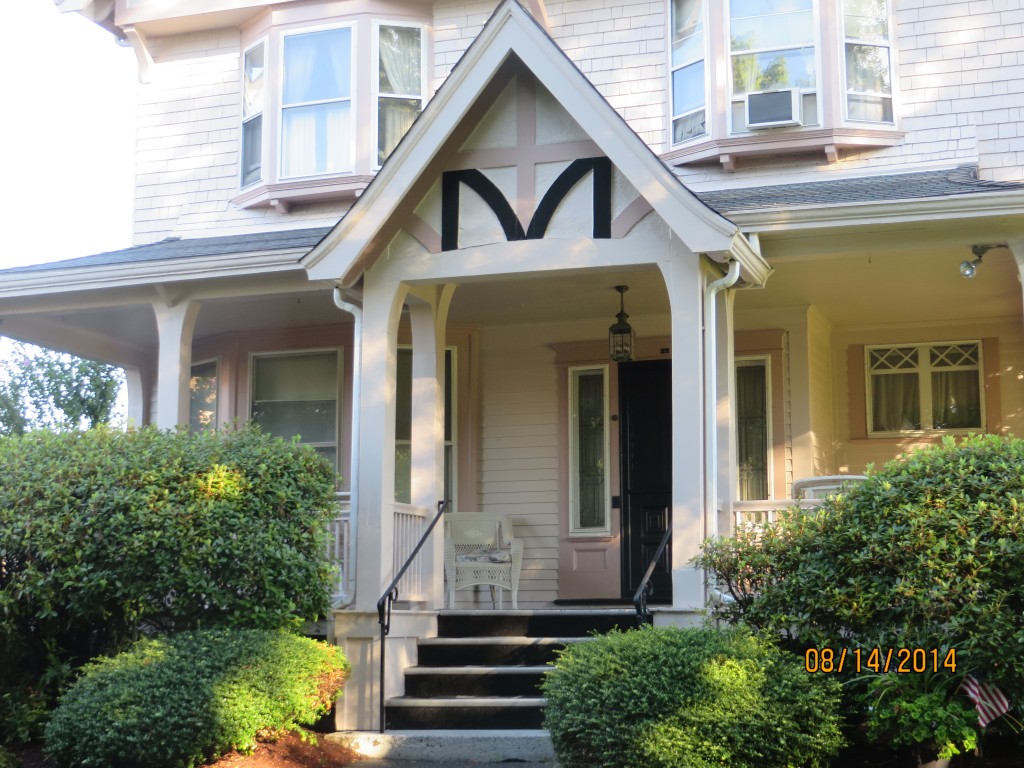 ~
Material on the Welch family and House 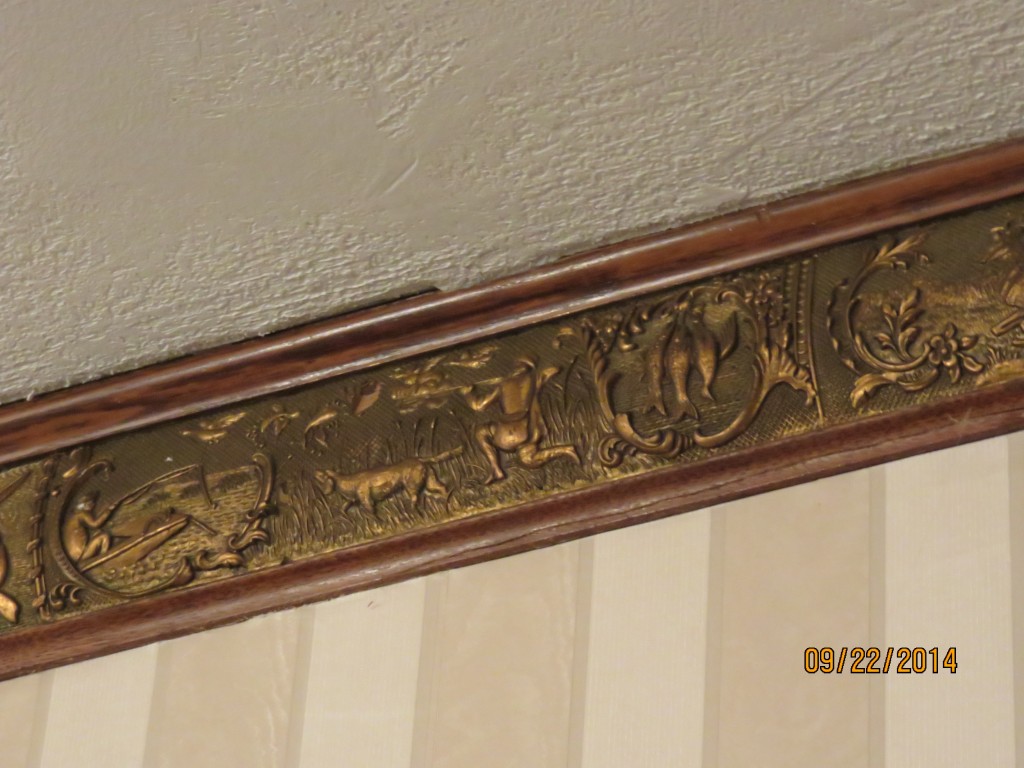