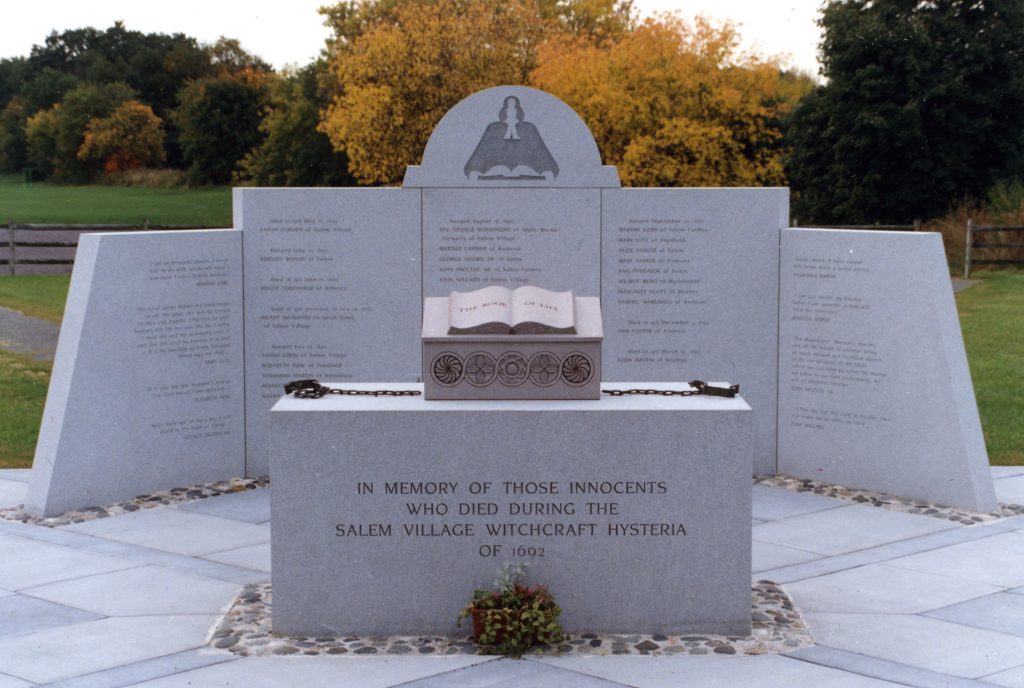 On May 9, 1992, the Salem Village Witchcraft Victims’ Memorial of Danvers was dedicated before an audience of over 3,000 people. It was the first such Memorial to honor all of the 1692 witchcraft victims, and is located across the street from the site of the original Salem Village Meeting House where many of the witch examinations took place. The Memorial serves as a reminder that each generation must confront intolerance and “witch hunts” with integrity, clear vision and courage.

This memorial project was undertaken by the Salem Village Witchcraft Tercentennial Committee of the Town of Danvers, which commemorated the 300th anniversary of the witch prosecutions during 1989-1993. The Memorial itself was designed by Committee members Richard B. Trask; Robert D. Farley, CSI; and Marjorie C. Wetzel. Finance Chairman Ralph E. Aridff, Jr. raised money for the project through donations of numerous town, civic, patriotic, business and ethnic organizations and by individuals. The property was donated and is now maintained by the Town of Danvers, and the Memorial is open to the public daily from dawn to dusk.

The design of the Memorial is highly symbolic in nature. On a light colored Barre granite sarcophagus measuring 4′ x 8′ x 4′ rests an oversized representation of a slant-top bible box. In colonial times such boxes were used as storage containers for precious volumes and papers. The positioning of the block with the bible box on top is reminiscent of a colonial pulpit and its juxtaposition and correct alignment with what would have been the original Meeting House pulpit across the street is purposeful. Yet the bible box, a domestic item of furniture, better represents individual home-inspired devotion, rather than communal, ecclesiastical worship, denoting the significance of personal beliefs and morals.

The box is composed of Canadian Pink granite, and on its front is carved several different and local style rosettes, typical design features found in both Puritan furniture and gravestones. The five rosettes banded together by a serpentine vine are Puritan symbols for eternity. Resting on top of the bible box, and composed of the same brown-reddish granite as the box itself, is an open book with an inscription in 17th century typeface reading, “THE BOOK OF LIFE.” In biblical language this phrase represented the record of those who should inherit eternal life. During the witch trials numerous persons testified that the accused had signed the “Devil’s book” thus becoming witches and doing the work of the devil. Those who were executed for witchcraft refused to confess to being witches, for they wanted to be inscribed in “The Book of Life.” At the time almost all in the Puritan community believed the accused to be guilty, while today the historical record, a modern-day “book of life” of sorts, has rectified the former deadly falsehoods of 1692.

The weight of truth, symbolized in the granite box and book, is also represented smashing through the falsehood of history, depicted by a pair of large scale reproduction metal shackles divided in two by the book and resting broken upon the block of granite. Curtis M. White, a talented blacksmith, staff member of the Saugus Ironworks National Park and at the time the resident overseer of the Rebecca Nurse Homestead, hand-forged the chains. Carved on the face of the block granite is the inscription “In memory of those innocents who died during the Salem Village witchcraft hysteria of 1692.”

To the rear of this granite piece stands a three-panel 12 feet long by 8 feet high granite memorial wall containing in 17th century spelling form the names of the 24 men and women and one child who died as a result of the witch hysteria. Also included are the towns of origin of these people which include besides Salem Village, Salem Farmes (Peabody), Salem, Andover, Billerica, Amesbury, Reading, Topsfield, Marblehead and Rowley. Above the center panel on a granite ellipse is carved the Tercentennial Committees’ logo featuring a man grasping an open book. The man’s hair style, robe and neck bands are reminiscent and symbolic of a 17th century cleric with an open bible or a magistrate with an open law book trying to come to understand and interpret the witch hysteria which had overtaken much of Massachusetts. The logo was designed for use of the Tercentennial Committee and donated by Jim Barina, founder of ‘Spellbound,’ a Salem, Massachusetts, advertising agency. On each side of the Memorial wall stands at a 45 degree angle to it a wall inscribed to include in their own words brave statements made by eight of the accused witches during their harrowing examination just across the street from the memorial location. 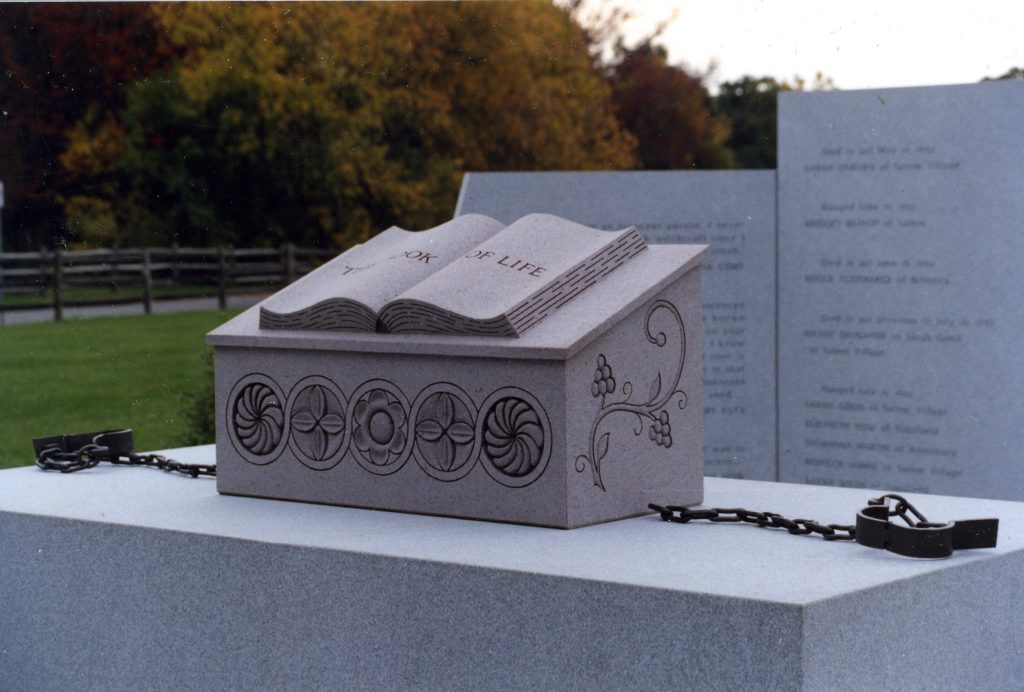 Note: The spelling of 17th century names varied widely even within families. Though there were several choices for spellings of many last names, the ones represented here are those for which the best contemporary evidence exists.

“I am an innocent person. I never had to do with witchcraft since I was born. I am a Gosple woman.” Martha Cory (March 21, 1692. From the Rev. Parris account of the examination at Salem Village Meeting House.)

“The lord above knows my Innocencye … as att the great day will be known to men and Angells. I Petition to your honours not for my own life for I know I must die and my appointed time is sett but the Lord he knowes it is that if it be possible no more Innocent blood may be shed …” Mary Esty (September 1692. Written while in prison awaiting execution.)

“If it was the last moment I was to live, God knows I am innocent …” Elizabeth How (May 31, 1692. From the Rev. Parris account of the examination at Salem Village.)

“Amen. Amen. A false tongue will never make a guilty person.” Susannah Martin (May 2, 1692. From the Rev. Parris account of the examination at Salem Village Meeting House.)

“I can say before my Eternal father I am innocent, & God will clear my innocency.” Rebecca Nurse (March 24, 1692. From the Rev. Parris account of the examination at Salem Village Meeting House.)

“The Magistrates, Ministers, Jewries, and all the People in general, being so much inraged and incensed against us by the Delusion of the Devil, which we can term no other, by reason we know in our own Consciences, we are all Innocent Persons.” John Procter, Sr. (July 23, 1692. Written while in Salem Prison.)

“… I fear not but the Lord in his due time will make me as white as snow.” John Willard (May 18, 1692. From the Rev. Parris account of the examination at Salem Village.) 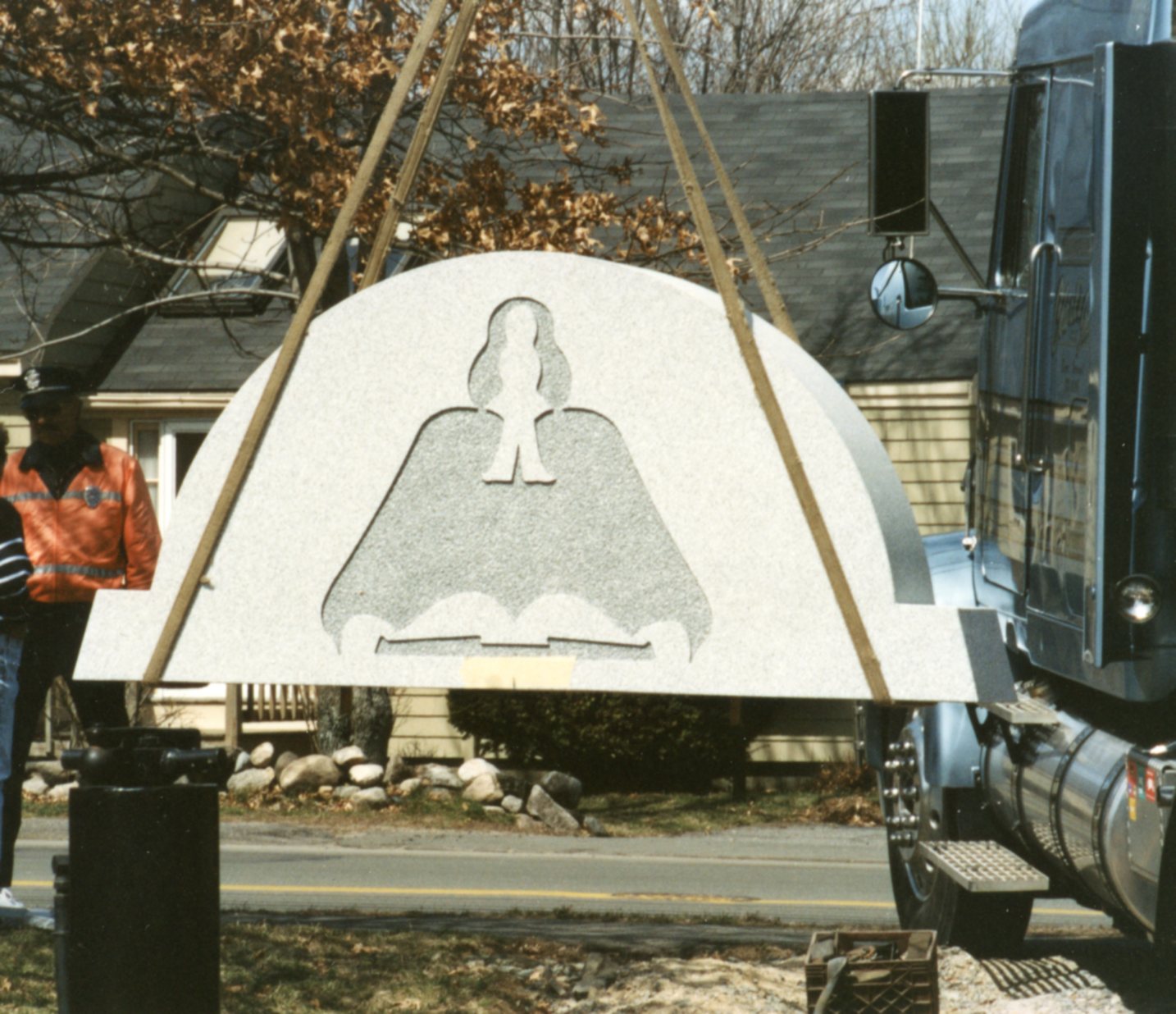 Dedication Of The Witchcraft Victims’ Memorial

A project of the
Salem Village Witchcraft Tercentennial Committee of Danvers.
Erected on land authorized by the Danvers Board of Selectmen at 176 Hobart Street.
Dedicated on May 9, 1992, at 2:00 p.m. 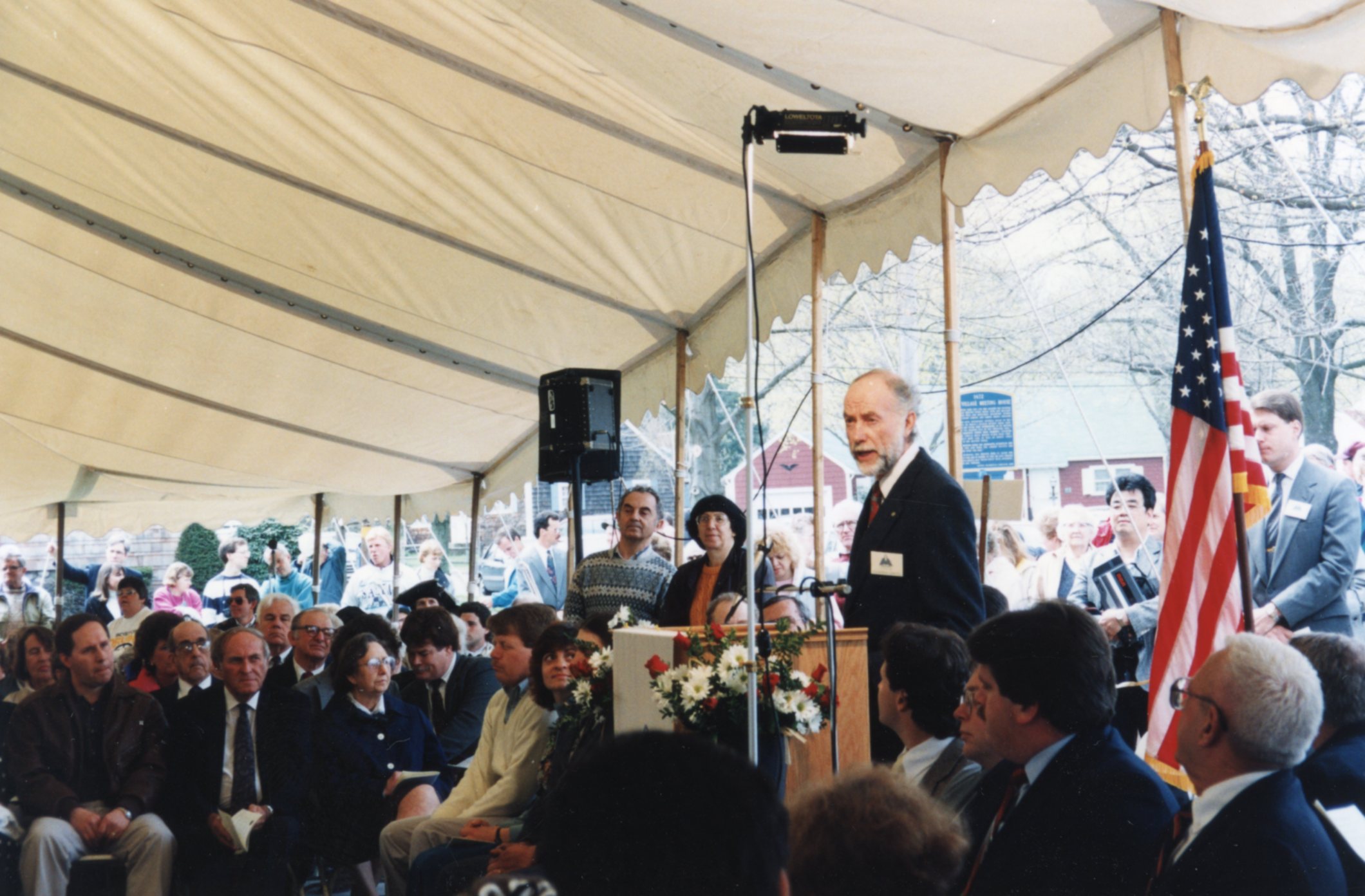 Robert Farley speaking at the dedication

Grateful acknowledgment is made to the several hundred individuals who participated in the Danvers Rotary Club sponsored fundraising Walk-A-Thon on October 20, 1991. Grateful acknowledgment is also made to the hundreds of people who contributed financially to the project. Contributions large and small were given by residents of Danvers, Essex County, Massachusetts, and from at least 25 states.

Near the sidewalk and facing the memorial is a granite block containing an attached bronze plaque which reads: 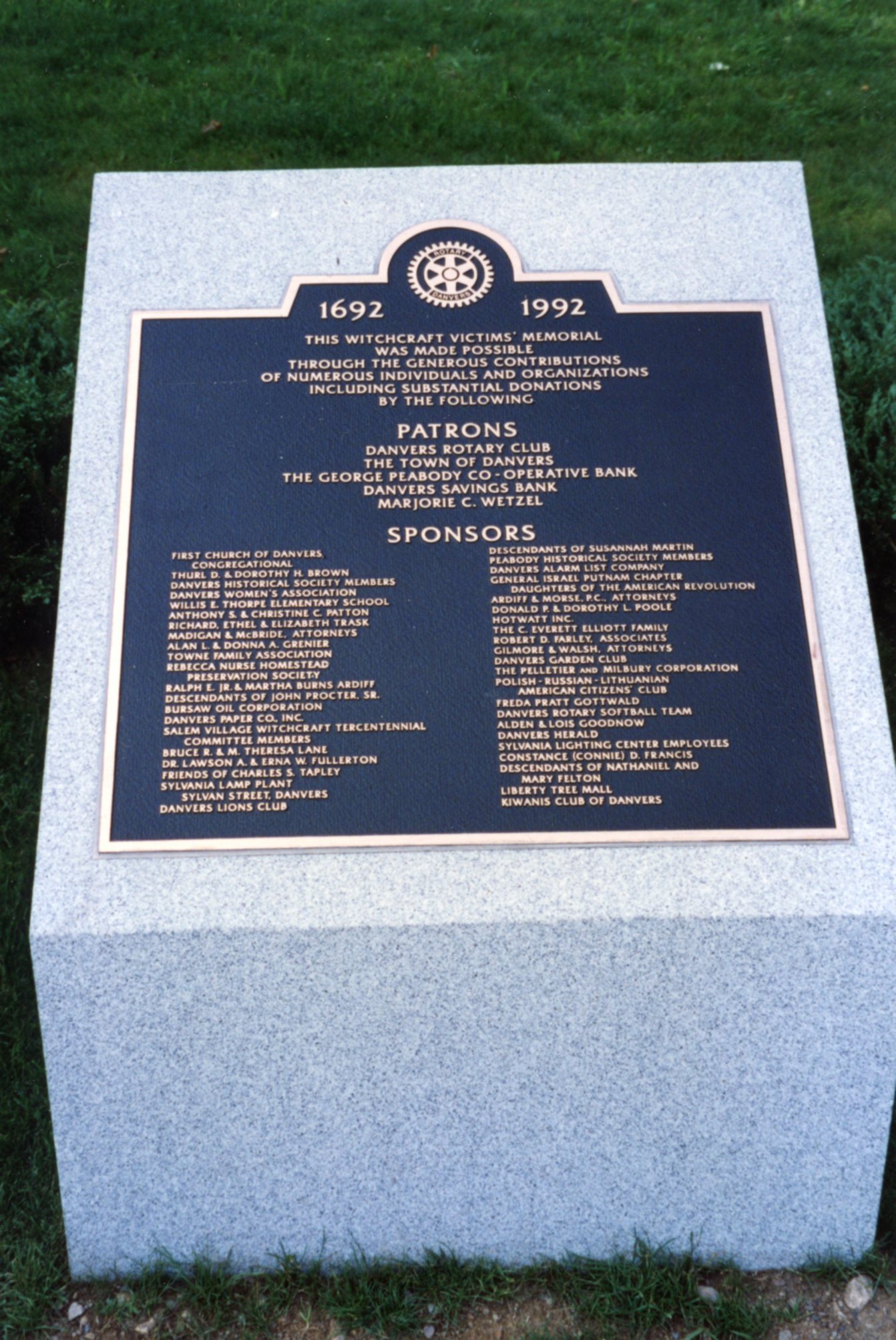 In conjunction with the Witchcraft Victims’ Memorial Plaza, the Danvers Preservation Commission, chaired by Penny Dumke, erected a 26” x 24” cast aluminum marker made by Lake Shore Industries of Erie, PA. The marker gives a brief history written by Richard Trask of the original Meeting House and the area around 176 Hobart Street.

Directly across from this site was located the original Salem Village Meeting House where civil and military meetings were held, and ministers including George Burroughs, Deodat Lawson, and Samuel Parris preached.

The infamous 1692 witchcraft hysteria began in this neighborhood. On March 1 accused witches Sarah Good, Sarah Osburn, and Tituba were interrogated in the Meeting House amidst the horrific fits of the “afflicted ones.” Thereafter numerous others were examined including Martha Cory, Rebecca Nurse, Bridget Bishop, Giles Cory, and Mary Esty. Many dire, as well as heroic deeds transpired in the Meeting House.

In 1702 the Meeting House was abandoned, dismantled and removed to this site until the lumber “decayed and became mixed with the soil.”

In 1992 a memorial was erected here to honor the witchcraft victims, and to remind us that we must forever confront intolerance and “witch hunts” with integrity, clear vision, and courage. 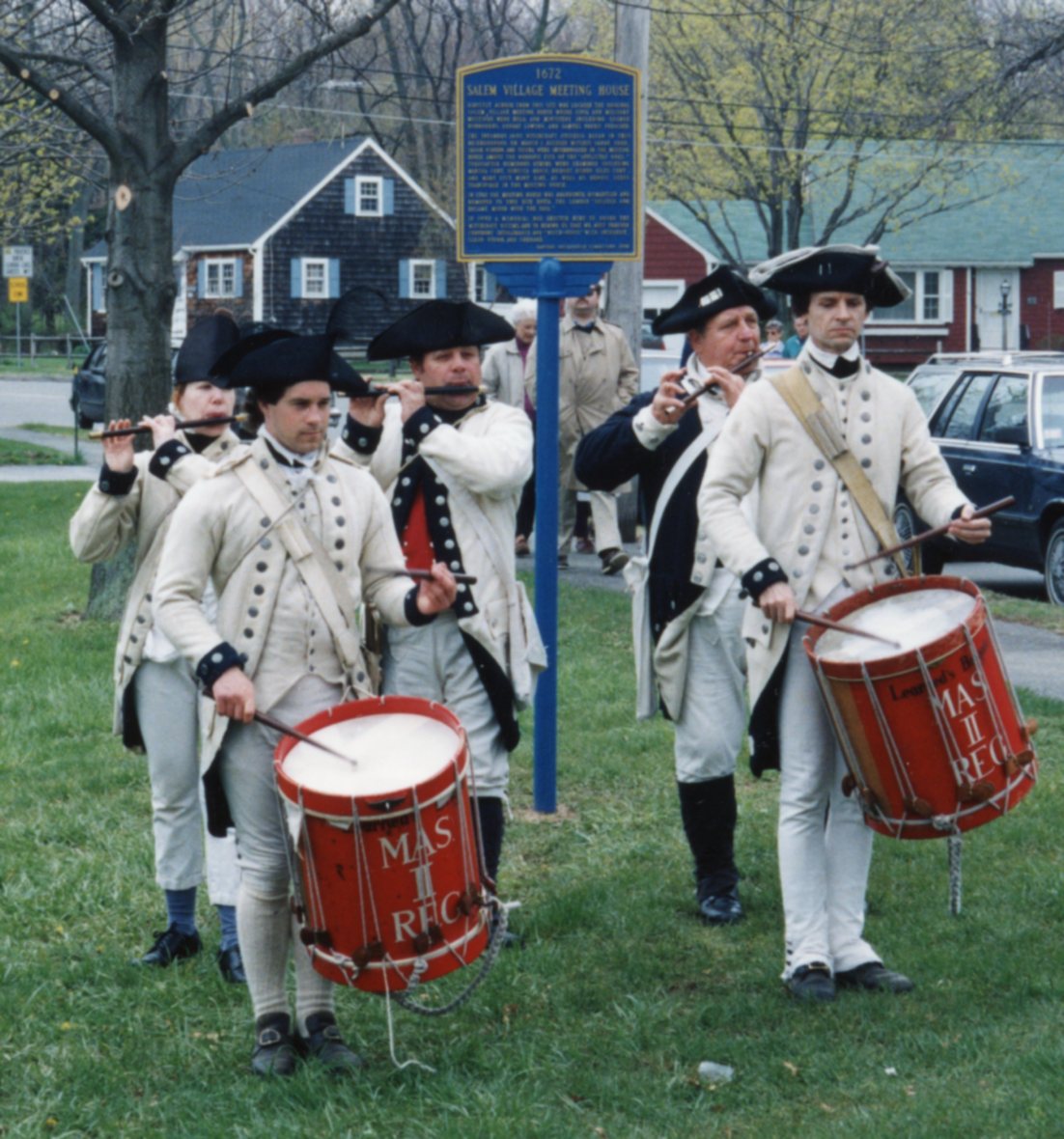