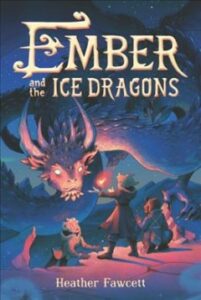 Middle Grade readers aware of the story of Saint George and the Dragon may be happy to meet a St. George who opts to adopt and love the dragon he encounters rather than slay her.1

Desperate to be accepted into London’s Chesterfield University of Science and Magic, Stormancer Lionel St. George casts a spell to turn the orphaned baby dragon he finds into a human girl. And the spell works, mostly. You see, twelve years later, Ember St. George still has her wings (made invisible by a different spell) and she’s prone to randomly bursting into uncontrollable flames. And it’s that last bit that worries her. Even moreso after she nearly burns down her father’s office at the University and absolutely damages one of the institution’s oldest, most cherished statues—an act of accidental arson that results in her father being temporarily fired from his post at the school. Again. To protect him from the danger she believes she poses, Ember decides to leave London before summer sets in (a tricky time of year for one prone to overheating to an incendiary degree) to spend time with her former-thief-turned-scientist Aunt Myra in Antarctica.

Once there, Ember is expected to attend classes (an odd experience, considering she’s never attended one in her life, learning instead from Lionel and the many, many books at her disposal), to possibly make friends (“Being around people all day was exhausting.”2), and, worse than all the rest, she’s not allowed to go with Myra on any of her ice dragon-finding expeditions. Then there’s the odious Lord Norfell to contend with, who, along with Prince Gideon, the youngest son of Antarctica’s ruler3, believes it is his right to hunt the region’s ice dragon population to extinction in order to increase his wealth and status. As far as Ember is concerned, it’s a despicable notion, and so she vows to make both Norfell and Gideon her archenemies.

After hearing about the Winterglass Hunt, a competition designed to track and slay as many ice dragons as possible, Ember determines to join the other hunters and sabotage their plans. A fellowship forms when two of Ember’s classmates, Nisha and Moss, stubbornly refuse to let her take part in the hunt on her own. But will their combined skills—Nisha’s tactical and mathematically inclined mind, Moss’ familiarity with the area’s flora and fauna, and Ember’s literal firepower and righteous, ferocious determination—be enough to stop the hunt and save the ice dragons?

If you have a young fan of fantasy on your hands (or if you, yourself, are a fan of the genre), this one is a delight! Fast-paced, written in clear and accessible language, with a magic system that is simple enough to grasp while also being thoroughly nifty.

One of my favorite aspects of Ember and the Ice Dragons is hands-down its atmosphere. And its nature-based magic system.4 Readers move from the fireside coziness of Lionel’s office to the frigid white world of Antarctica, and both of those settings—indeed all of the places5 and landscapes in the book—are compellingly rendered. Once you’ve stepped inside this book, you are well and truly made to experience the warmth of nearly every interior as well as the inescapable cold stretching across the land, to feel sea spray and snowfall, and the quite literally electric presence of a meddling-slash-hilarious huddle of penguins.6

But perhaps even more than the atmosphere, scene-setting, and magic, I adored the formation of the fellowship, the turns it took over the course of their quest, and the deep friendship that eventually comes about as a result of Nisha’s and Moss’ total acceptance of Ember. And I loved, loved, loved the achingly genuine devotion and affection that informed every one of Ember and Lionel’s interactions. But maybe the very best part? Introverted, anxious, compassionate Ember is never asked to be anything other than who and what she is by those who come to truly know her, and isn’t that a beneficial message/reminder for any reader, regardless of age.