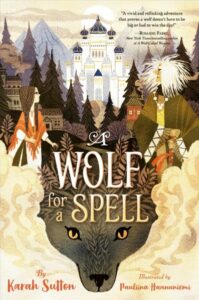 “Since she was a pup, Zima has been taught to fear humans—especially witches—but when her family is threatened, she has no choice but to seek help from the witch Baba Yaga.

Baba Yaga never does magic for free, but it just so happens that she needs a wolf’s keen nose for a secret plan she’s brewing. Before Zima knows what’s happening, the witch has cast a switching spell and run off into the woods, while Zima is left behind in Baba Yaga’s hut—and Baba Yaga’s body.

Meanwhile, a young village girl named Nadya is also seeking the witch’s help, and when she meets Zima (in Baba Yaga’s form), they discover that they face a common enemy. With danger closing in, Zima must unite the wolves, the witches, and the villagers against an evil that threatens them all.”

A Wolf for a Spell is a fantasy adventure relayed in short chapters that alternate between Zima, Baba Yaga and Nadya. Each narrative thread seemingly unfurls in one direction but quickly enough the three begin to weave together, and readers who settled on a favorite character at the start of the book may find their favor taken up by another before its conclusion. (I was invested in Baba Yaga’s sections until Zima shouldered her out of the way.) Younger readers will need to keep track of the different threads, which might prove slightly challenging throughout the first quarter of the book, but once they fall into the alternating rhythm, the multiple perspectives will provide them with all of the best views of the action and will likely keep them engaged with the plot.

One of the things I particularly loved about the book were all of the nods to other stories embedded in Russian folklore. “Vassilissa the Brave” is one, and “Tsarevitch Ivan, the Firebird and the Gray Wolf” is another. (Recognizing these tales enhances the experience in the same way spotting an Easter egg in a Marvel movie would, but it’s definitely okay if a younger reader is unfamiliar with them going into this book. And if they’re curious, you could give them Alexander Afanasyev’s Russian Fairy Tales, which includes both of the stories previously mentioned.) Pauliina Hannuniemi’s illustrations were another thing I enjoyed while reading A Wolf for a Spell for the depth and dimension they gave to the unfolding story.

Try this one out with your young reader if they enjoyed watching Brave or Wolfwalkers.